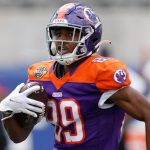 The USFL season is in full swing and there are still beatable lines plus big prize pools on DraftKings. With half of the season in the books, things have stabilized as much as they are ever going to. It’s time to get back in the streets with a comprehensive breakdown of the Week 6 slate. You can get a broader view of all of the teams in my USFL Team by Team Preview.

The Generals were making their quarterback tandem of Luis Perez and De’Andre Johnson work to perfection, but the latter was moved to the inactive roster for this game because of an injury. Perez has completed 70 percent of his passes at 6.4 yards per attempt. Those numbers aren’t great, but not every quarterback gets a full allotment of snaps in this league. I can get on board with some shots on him in large tournaments if you’re feeling like a sicko.

Jordan Ta’amu has caught fire since a slow opening to the season. After tossing four scores in Week 6, he has eight touchdowns to two interceptions over his previous four games. Add in a healthy role on the ground and Ta’amu is the cash game quarterback. With the Generals losing Johnson for this game, I also like the Bandits’ moneyline.

The Generals should give more rushing work to their backfield sans Johnson, making both Trey Williams and Darius Victor intriguing options. Victor leads the team with a 35 percent share of the team’s carries with Williams close behind at 32 percent. Williams also gets more receiving work.

B.J. Emmons and Juwan Washington have ineffectively split the Tampa Bay backfield in recent weeks. Neither is a particularly appealing DFS option.

Kavontae Turpin typically doesn’t play on every down, but that has begun to matter less and less. When he is on the field, he is the star of the show. Turpin leads the league in targets per route run. Alonzo Moore ran a route on every one of his team’s passing plays last week. He has experience in head coach Mike Riley’s system and has some deep speed.

John Franklin was the only Tampa Bay receiver to run a route on more than 60 percent of Ta’amu’s dropbacks last week. The rest of the team’s receivers have been stuck in a five-man rotation for routes.

Kyle Sloter is pacing the league in passing yards but is behind a handful of passers in completion rate, touchdown rate, and yards per attempt. Volume has gotten him to this point. He is now dealing with a hand injury and even left the field briefly last week. He has plenty of upside, but I expect the Breakers to keep the ball on the ground as they handle things against one of the league’s worst teams.

The Panthers appear set to start Paxton Lynch at quarterback after cutting Shea Patterson. Lynch appeared in a few games early in the season as the Panthers’ short-yardage quarterback, but he looked as ineffective as ever when throwing the ball.

Anthony Jones led the Breakers with 22 carries for 102 yards and a score last week. Jones still split time with Jordan Ellis, who should be expected to take the field for passing downs, but Jones has a clear edge as a runner. Jones was a committee back at FIU before a brief stay with the Seahawks in 2020.

The Panthers’ departed from their usual running back-by-committee ways in Week 6 and gave Reggie Corbin 70 percent of their carries. Corbin has been electric with the ball in his hands. Add in a full-time role and he is one of the best fantasy options at just $6,000.

Shawn Poindexter is expected to be active for this game, muddying the waters of New Orleans’ receiver rotation. Jonathan Adams and Johnnie Dixon should operate as the team’s clear top duo with Poindexter and Taywan Taylor splitting WR3 duties.

Lance Lenoir is one of two players with a target share north of 30 percent. He has seen at least nine targets in all but one game. Despite this, he hasn’t posted a 20-point game yet. We will keep betting on his delicious air yards in hopes of a breakout game. The regression will hit. It has to. Devin Ross and Joe Walker play most passing downs, putting them in play for tournaments.

The Stallions rotated Alex McGough in last week even though J’mar Smith has been arguably the league’s best quarterback. Smith has some rushing potential and an accurate arm, but any quarterback splitting reps will be a risky DFS play.

Vad Lee has thrown 66 passes while running 10 times over the past two weeks. He also played every snap in Week 6. Lee has been scattershot as a passer but can take off when needed. If the Maulers get beat up again this week, Lee could be pulled before the final whistle. Given how poor they are in all phases of the game, that is certainly on the table. However, he is only $7,400 and has rushing upside, so there are worse DFS plays.

As always, big props to Ian Hartitz and the PFF team for charting USFL games.

In his first game as a Stallion, Bo Scarbrough turned 16 carries into 104 yards and a score. He also secured both of his targets. As a massive favorite over the lowly Maulers, Scarbrough is a safe bet to see plenty of work this week.

The Maulers have split their backfield evenly and are massive dogs this week. That’s an easy fade.

Victor Bolden leads the league with a 33 percent target share. He is the league’s clear WR1 and should hop back into the NFL once the USFL’s season concludes. Osirus Mitchell is second on the team in targets and has posted back-to-back games with a target share over 20 percent. His $9,500 price tag is egregious, but it does serve to keep his ownership low. Marlon Williams is the team’s third receiver and posted a dominant final season at USF. He is worth a shot in large tournaments, but could easily go out and catch zero passes.

Tre Walker and Bailey Gaither have combined for one game below at 20 percent target share. The Pittsburgh passing attack runs through this duo, making stacks with Lee predictable, even if they have a low probability of hitting. Delvon Hardaway doesn’t see as many targets but is on the field for most plays. He won’t draw any ownership either.

Case Cookus spends his Sundays (and sometimes Saturdays) throwing checkdowns, making him a fairly lacklsuter DFS option. However, the high pass rate of the Stars gives their pass-catchers loads of upside.

Clayton Thorson is six-for-six on throwing fewer than 30 attempts and staying under 20 DraftKings points.

Mark Thompson is that dude, as the kids say. He leads the USFL in rushing yards after contact and is second in total rushing yards. Still, until last week, when he scored two receiving touchdowns, he hadn’t been used through the air. I expect that trend to re-establish itself in Week 7. Thompson will be a boom/bust runner who could become popular based on his Week 6 performance. I’ll continue fading at my own risk, hoping he doesn’t find the end zone and busts.

Matt Colburn ran like a madman in Week 6. He scored three times in one of the best fantasy performances I’ve ever seen in a spring league. Colburn earned the right to dominate the snaps for Philly this week, though Darnell Holland could disappoint us by taking the field more than we expect.

Maurice Alexander took Diondre Overton’s spot in the starting lineup last week, joining Jordan Suell and Devin Gray for three-receiver sets. Alexander showed some big-play ability early in the season and is now an every-down player. Gray, Suell, and Bug Howard, who scored twice last week, are all viable options based on their potential to catch a lot of passes.

The Gamblers played plenty of four-receiver sets last week, putting all of Isaiah Zuber, Teo Redding, Anthony Ratliff-Williams, and Tyler Palka on the field for at least 77 percent of Houston’s passing downs. This resulted in the targets being distributed evenly, killing the fantasy upside of everyone involved. Zuber has had an edge over his teammates in previous weeks, putting him in play as a one-off.