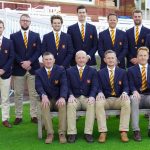 The latest tour in the MCC overseas touring programme begins this week, with the Club embarking on a men’s tour of Serbia, before a trip to Romania follows next week.

Overseas tours are a crucial part of the Club’s commitment to the global game and after a hiatus due to the complications of overseas travel caused by Covid-19, the Club returned to touring by sending two teams to play in Spain last November.

MCC is now embarking on two European summer tours and the initial trip to Serbia this week will see MCC play five T20 matches in their seven-day tour, including matches against the Serbian National Team and the Belgrade Cricket Association.

As with any MCC tour, part of the commitment to the country is to provide coaching sessions with local children and the squad will be doing so at Belgrade Fortress, ahead of their first match.

Toby Drummond, who plays for Toft in the Cheshire Premier League, will captain MCC in Serbia, whilst Jean-Paul Rees is the Team Manager.

A second squad will depart for Romania next week, where MCC will play four T20 matches against Cricket Romania. All four games will take place at the Moara Vlasiei Cricket Ground in Bucharest, a ground that has been hosting T20 International cricket since 2019.

Doug Mulholland, who represents Great Ayton in the North Yorkshire and South Durham Premier League, is the captain for the Romanian tour, with Mark Langford managing the side.

MCC is also due to tour Italy, Uganda and Nepal later in the year. The trip to Nepal will see separate squads of both men’s and women’s players on the tour.

MCC Assistant Secretary (Cricket and Operations) Jamie Cox said: “Overseas touring continues to be an important part of the Club’s commitment to growing the game around the world, particularly in nations where cricket is not as popular as other sports.

“We are thrilled to be sending two squads to European countries in quick succession. The standard of cricket in both Serbia and Romania is improving and we have selected a squad of MCC Playing Members who are excited to have the chance to represent the Club abroad.”

The two MCC men’s squads for the tours are:

The fixtures are as follows (all T20):