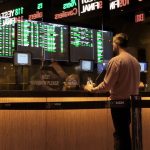 House Speaker Ron Mariano sharpened his criticism this week of the Senate’s sports betting bill that omits wagering on collegiate sports — a provision the Quincy Democrat has previously called a dealbreaker as both chambers must now negotiate their conflicting approaches.

Nearly a month after the Senate passed its sports betting bill, which contained consumer protections intended to curb problem gaming, Mariano described the legislation as “paternalistic” yet “well-intentioned.” Mariano, echoing concerns raised by sports betting and responsible gambling experts with the nonprofit Entain Foundation, said the Senate’s failure to include allowing bets on collegiate sports will only fuel activity on the black market — and prevent the Legislature from maximizing potential tax revenues.

“There’s no bookie I know that’ll check you into a rehab to help you beat your gaming addiction,” Mariano said. “There’s no bookie in the world that’s going to give you an extension on what you owe because you have a gaming problem.”

The speaker’s comments to reporters on Thursday came after he outlined legislative priorities — such as lobbying business leaders to step up in providing child care resources — at a Greater Boston Chamber of Commerce forum.

Under the Senate’s gambling bill, Bay Staters cannot use credit cards to place bets, though debit cards and other digital payment options are allowed. Other safeguards for problem gambling include limits on television and online advertising, as well as the creation of a compulsive gambling program through the Executive Office of Health and Human Services.

“This bill implements robust preventive measures for problem gambling and provides significant support for consumers who find themselves in over their heads,” Senate Ways and Means Chairman Michael Rodrigues said last month.

Yet Mariano remains unconvinced, saying Thursday it “makes no sense” not to deal with the two biggest collegiate sporting events.

“It’s hard for me to figure out what the purpose of the Senate bill is,” Mariano told reporters.

He also questioned how disallowing credit cards would benefit those dealing with problem gambling. Drawing a parallel to someone with a shopping addiction, Mariano noted there’s no mechanism for a home shopping network to intervene with customers who rack up steep bills.

Gov. Charlie Baker, a proponent of sports betting, has said he would support collegiate wagering depending on a proposal’s wording. Although the Senate passed its bill on a controversial voice vote, Senate President Karen Spilka recently disclosed she would have voted yes if given the opportunity — breaking weeks of silence on her stance on the legislation.

Sports betting conference committee members include Reps. Jerry Parisella, Aaron Michlewitz and David Muradian, as well as Sens. Rodrigues, Eric Lesser and Patrick O’Connor. Rodrigues’ office did not immediately respond to a MassLive question on whether the first committee meeting has been scheduled.

Material from State House News Service was used in this report.