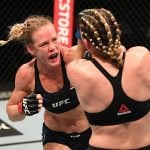 The UFC continues to churn out fight cards for bettors with UFC Vegas 55 on Saturday. Holly Holm headlines the 11-fight card against Ketlen Vieira in a matchup between two women’s bantamweight contenders. It’s fascinating how these two fighters’ careers have intertwined to this moment. Holm will always have a special place in the hearts of the betting community for knocking out Ronda Rousey as a +900 underdog to become champion at UFC 193. She turned around and lost her belt to Meisha Tate — the woman Vieira beat soundly last November to earn this shot at Holm. It’s been six years since Holm has been champion, but she remains one of the elite fighters in the division.

Holm is one of two sizable favorites I circled on my card. Each has a distinct path to getting his or her hand raised, which allows us to capitalize on additional value by method of victory. I also have a small underdog play for the night’s co-main event. Let’s get started with Saturday night’s main event.

After a 4-0 start to her UFC career, Vieira followed up consecutive losses with wins. In her last victory versus Tate, she was able to pick apart her opponent with her improved striking. She won’t be as fortunate against a technically superior striker like Holm and will get increasingly frustrated as the fight progresses. Vieira has a grappling edge, but Holly defends takedowns well (76%) and absorbs little damage due to excellent footwork and overall defensive awareness in the pocket. Holm’s blend of traditional boxing and kickboxing should allow her to keep Vieira at range while slipping in and out the pocket to pile up points for the judges.

The days of Holm finishing the top contenders with devastating leg kicks are most likely over, but she is still savvy enough to secure her spot in the top of the rankings. I am betting that over the course of five rounds, she will make the judges’ job easy. The odds to win by decision are more than fair at -115, so I’ll take my shot on what I see as a likely outcome.

“Bang Bang” Njokuani followed up his Contender Series win by starching Marc-Andre Barriault in just 16 seconds. The 33-year-old former Bellator veteran could be entering his prime at the perfect time. Njokuani, a dynamic kickboxer, gets a willing opponent to stand in the center of the Octagon and exchange. Todorovic holds an advantage in wrestling, but he completes less than 10% of his takedown attempts, so it’s unlikely grappling will play a factor in this fight. Three of Todorovic’s four UFC fights ended by TKO, and this one is headed down the same path. “Bang Bang” has good length for the middleweight division and has a massive six-inch reach advantage. He also will be the superior fighter in the clinch, where he can punish Dusko with knees. Against a hittable opponent who absorbs 4.96 significant strikes per minute, there will be plenty of opportunities for Njokuani to make another statement with a devastating finish. It also presents a nice opportunity to get off the wide moneyline price. I’d recommend the five-way method of victory to include the submission because even money for the favorite to finish the fight is a solid bet.

Betting fights knowing you are going to see fireworks is a different level of energy. I can understand why Ponzinibbio, in his 15th UFC fight, is a slight underdog against the much younger Pereira. I just think he wins this fight more times than not, making him valuable at his price. Ponzinibbio’s speed with his combinations will be a big advantage, as Pereira tends to load up and isolate his shots. Santiago has good snap on his jab and leg kicks that will make the favorite uncomfortable at range. If Pereira wants to force his way to the pocket, he better be prepared for Ponzinibbio’s bread and butter: a quick right hand and left hook. I expect this to be a highly entertaining slugfest filled with action, and those fights always have a higher level of variance. Ponzinibbio’s forward pressure and assertive approach to finishing fights is a double-edged sword. He could easily walk into getting clipped by the more than capable Pereira. However, I am OK with that inherited risk at his price. I think the longer this fight goes, Ponzinibbio’s cardio will help him pour it on in what could easily be a deciding third round. Give me Ponzinibbio to win one more war at plus money.