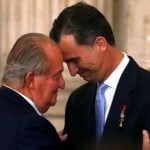 Juan Carlos, who abdicated against a backdrop of scandals over his finances and love life, had communicated “his decision to go to Spain from May 19 to Monday, May 23”, the Royal House said.

Spain’s King Juan Carlos and his son Crown Prince Felipe (R) hug each other as they attend the signature ceremony of the act of abdication at the Royal Palace in Madrid.(REUTERS)

Share Via
Copy Link
AFP |
Spain’s former king Juan Carlos will return to Spain this week after nearly two years in exile in the United Arab Emirates, the royal household said on Wednesday.

Juan Carlos, who abdicated against a backdrop of scandals over his finances and love life, had communicated “his decision to go to Spain from May 19 to Monday, May 23”, the Royal House said.

Juan Carlos will first head to the northwestern town of Sanxenxo, where a regatta will take place from Friday featuring the “Bribon”, a yacht with which he won the world title in 2017.

He will then travel to Madrid on Monday to visit his son King Felipe VI, his wife Sofia and other members of his family before leaving “the same day” for Abu Dhabi “where he has established his permanent and stable residence”, the palace said.

The visit is part of “His Majesty Juan Carlos’ desire to visit his family and friends regularly in Spain” in a “private” setting, the palace statement added.

The statement said Juan Carlos wanted to “facilitate” his son Felipe’s “exercise” of duties in view of “the public consequences of certain past events of (his) private life”.

Three investigations against him in Spain were finally closed in early March, paving the way for his eventual return.

But the visit has been criticised by the far-left Podemos party, which is part of Prime Minister Pedro Sanchez’s coalition government.

Even before Juan Carlos went into exile, Felipe decided in March 2020 to renounce his father’s inheritance and withdraw his annual allowance of nearly 200,000 euros.

Juan Carlos’ choice of the UAE has stoked criticism, as his ties with the Gulf monarchies are at the centre of suspicions over his opaque wealth.

The excesses of the former monarch only came to light in the last years of his reign, triggering a string of investigations.

In the throes of a corruption scandal involving his son-in-law Inaki Urdangarin, Juan Carlos abdicated in favour of Felipe.

In the most significant case, Spanish prosecutors have sought since December 2018 to determine whether the 84-year-old pocketed a commission linked to a Spanish consortium’s construction of a railway in Saudi Arabia.

The Saudi monarchy paid $100 million in 2008 into the Swiss account of a foundation to which Juan Carlos was a beneficiary.

But prosecutors said the money was a “gift” received by the king in his capacity as head of state, which could have constituted corruption.

Russia’s defence spending was up nearly 40% in the first four months of the year, according to preliminary data released by the finance ministry on Wednesday, almost three months into Moscow’s large-scale military campaign in Ukraine. Russia spent 1.7 trillion roubles ($26.4 billion) on defence between January and April, almost half the 3.5 trillion roubles, or 2.6% of GDP, budgeted for all of 2022.

One of three former Minneapolis police officers facing trial for the death of George Floyd pleaded guilty on Wednesday to manslaughter charges. Thomas Lane was convicted in February of federal charges of violating the civil rights of the African-American man whose May 2020 murder sparked nationwide protests, Floyd. Lane, who is white, had been scheduled to go on trial next month on Minnesota state charges of aiding and abetting second-degree murder.

Tesla’s Musk says he ‘can no longer support’ Democrats, ‘will vote Republican’

Tesla Inc CEO Elon Musk said on Wednesday that while he voted for Democrats in the past, he will now vote for Republicans. “In the past I voted Democrat, because they were (mostly) the kindness party. But they have become the party of division & hate, so I can no longer support them and will vote Republican,” he tweeted. Tesla does not have unions at its U.S. factories.

An S&P Dow Jones Indices executive told Reuters on Wednesday it has removed electric carmaker Tesla Inc from the widely followed S&P 500 ESG Index because of issues including claims of racial discrimination and crashes linked to its autopilot vehicles, and Tesla CEO Elon Musk responded with harsh tweets including that “ESG is a scam”.

‘Stand With Ukraine’: Ukrainian flag on summit of Everest

Antonina Samoilova had tears in her eyes as she unfurled the Ukrainian flag on the summit of Mount Everest last week, she said on Wednesday after returning to Kathmandu. I knew already before the expedition that I am the only Ukrainian on Everest this year. “I was like ‘Whoo! Thank god!’” she said. And her phone buzzed with hundreds of messages of support from friends and strangers once she reached base camp.