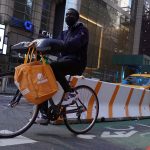 Grubhub’s offer of free lunch to anyone in the New York City metro area today led to sheer chaos. Many were unable to access the promotional deal — which was scheduled to run from 11 am to 2 pm ET this afternoon — when both the website and app started to crash, according to tweets from many frustrated users. A large number of restaurants were overwhelmed with orders from hungry customers, prompting them to pause taking on new orders or “close” for the day. Although Grubhub’s “free lunch” promo was actually just a deep discount (the offer was good for $15, and customers were responsible for additional taxes, tip and delivery fee), turns out few people will turn down the offer of a cheap meal, especially in one of the world’s most expensive cities. While access to the website and app was eventually restored, a number of customers still complained about delayed or canceled orders.

At its peak, Grubhub said its platform was receiving 6,000 orders per minute. “The initial demand temporarily overwhelmed our app, causing some diners to experience an error message when they used their promo code. However, this was quickly rectified, and along with our restaurant and driver partners, we were able to successfully fulfill more than 400,000 lunch orders connected to the promotion,” a spokesperson for Grubhub told Engadget.
But workers and restaurant owners faced worse problems than merely going hungry on their lunch breaks. Buzzfeed spoke to several Grubhub delivery people and restaurant owners and workers, all who recounted a harrowing, stressful day filled with non-stop orders. Many workers and restaurants told various outlets that they weren’t informed about the promo in advance.

“We really got slammed by it today,” Ching, a worker from Greenberg’s Bagels told Buzzfeed. “It was just non-stop all day.”

Grubhub denied claims that it didn’t inform restaurants of the promo beforehand. “Grubhub isn’t just a delivery logistics app, we are a marketplace for restaurants. And as we do with any promotions, we notify our entire restaurant network in advance via multiple points of communication,” a Grubhub spokesperson told Engadget in a statement.

Despite the advance warning, it’s clear many restaurants were unprepared for the barrage of orders and the extra strain on staff and food supply that such an offer incurred.