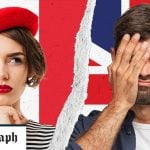 The dinner party was going OK. Our American and French guests were getting to know one another. Right around the arrival of the pork fillet, conversation turned to water and then to water softeners, for ours is a devil-may-care household. Things were, though, about to go belly-up. One American friend had lately bagged a contract to sell US softeners in France. Across the pork, gratin dauphinois and asparagus à la vapeur, he grasped the opportunity to launch into a sales spiel, as if he’d just burst out through the screen from a TV shopping channel.

The French guests were astounded. So was I. In France, talking money and business at a private table – especially to people you barely know – is a no-no. Compounding this by actually trying to flog stuff is like devil-worship during Mass. You just don’t do it. But the American ploughed on, with the rosy-cheeked, can-do attitude which assumes everyone’s plugged into the material world, 24/7. Mini-catastrophe loomed, until my French wife’s best friend changed the subject to dialectical materialism, the best way with crayfish, or childbirth – I forget which; they’re all acceptable dinner table topics – and the evening got back on track.

I mention this to illustrate that, even though one might be speaking the same language – in this instance, English – conversation with French people is still fraught with traps. English and French speakers converse differently. Different conventions reflect different mindsets: even in chatting, the French are more formal, reserved, wary and, in many cases, afraid of being considered insufficiently serious or intellectual. I have, for instance, met very few French people who have ever read a word of Proust, but I have met none who couldn’t discourse about the “madeleine de Proust”, as if they had.

As the holiday season swings round, here are a few pointers on French conversation.

In general, the French suspect mateyness. The fellow who thunders in, hand out-stretched, beaming: “Hi, I’m Billy-Bob from Atlanta, Georgia” – thus confirming what’s written on his baseball cap – is a fellow who will cause French people to back off. Unlike English, French conversation has two levels. The “vous” level – the formal “you” – recognises France’s social circumspection, putting on pause any tendency to chumminess. It ushers in a probationary period: do I want to let this person any closer? There are people I’ve known for 30 years whom I still call “vous”. “Tu” takes over when you’ve decided that, OK, he or she is not so bad. We can proceed. But don’t simply swing into “tu” unannounced; you must agree the transition with your interlocutor. And don’t use “tu” when dealing with officialdom. It implies you feel superior. You almost certainly do, but for God’s sake, don’t let on.

Impart personal information with parsimony, and don’t expect much in return. The French communicate details of their job, marital status, kids, mistresses, leisure pursuits, whereabouts of their homes and their origins, as if the particulars might be taken down and used against them. Which, in the past, they quite often have been.

2. The best topics of conversation to begin with

So what should you open with? Food is always good. An analysis of the cassoulet you ate last night will certainly hit the spot. Feel free to illustrate with diagrams. Culture, perhaps via an actor we all know. Dépardieu, for example (“Early work good, later films middling” should get you started.) Rugby. Soccer – words in praise of Zidane or Mbappé rarely fail. Ditto Churchill, less so Mrs Thatcher. More so, David Bowie. Most so, our Royal Family. I’ve just come in from listening to my young (French) neighbour being dithyrambic about HMQ’s platinum jubilee. The subject is a red-hot favourite.

3. Avoid asking the older French how she is, for she will tell you

So will he, if it is a he – in surgical detail and using all the correct terms. The French are the most medically articulate people I know. This is because they are all hypochondriacs. They never have a mere sniffle, bruise or ear ache but a rhinopharyngite, hématome or otite. They also have imaginary illnesses all of their own, like liver-ache. And they know the names and purposes of all the dozens of pills they are taking. There will come a moment, about 10 minutes in, when you long to smack them round the head with a bed-pan.

4. Not all French people appreciate irony or self-deprecation

Not on a British scale, anyway. Hail a chap with a cheery: “Greetings, you four-eyed b*****d” and he might very well take it badly. Similarly, if a French fellow says he’s rotten at tennis, he usually is. The British bloke saying the same thing is about to wipe you out in two sets.

5. Understatement is something else which the French tackle with uncertainty, if at all

Conversation may include easy references to Voltaire, Marx, positivism, Abel Gance, Sartre, the post-Impressionists and Houellebecq. French people aren’t afraid of being considered clever and cultivated. The real fear is of being thought meat-headed. This favours seriousness. In the main, they’re a cultured bunch. And, if they don’t know, they’ll fake it. Whence a bloke, the other day, telling me that the Scots invented whisky only when the Napoleonic wars made cognac hard to come by in Britain. “Are you sure?” I said. “Ask any Scotsman,” he said.

7. All this makes France sound mirthless. It isn’t.

I almost burst a lung laughing among other guests at a table-d’hôte dinner in a French B&B the other day. The French are as funny as any people on earth, on certain conditions: [a] that you make it clear you’re moving into the realm of humour; the French are less likely to mix the light-hearted and the serious, [b] you limit fart, burp and boob references, for they don’t invariably play well, and [c] you understand that, in place of vulgarity, French gatherings favour bracing, sensual filth, especially after the fourth bottle.

8. Lay off politics; you’re bound to annoy someone, possibly everyone

But, if you must, talk only of British politics. The subject causes merriment in France. That a political leader be hauled over the coals – to the brink of resignation – for drinking a beer or a glass of wine, eating a curry or a slice of cake is cheering to a nation where the rabid extremes of left and right are at the gates of power, where a former PM and presidential candidate has just been given a jail sentence, where a real president has been in and out of court for years, and where one of his predecessors hid an entire family during his stint at the Elysée Palace. Little wonder that the political discourse in France is even more cutting and caustic than in Britain.

9. Never criticise the food nor wine

Food and wine merit their own mention here, for there is no conversation about either which is ever too long for French tastes. The key thing here is: never criticise. If the wine you’re tasting is awful, look quizzical and say: “Perhaps needs a little more time fully to express itself.” And, if served something unspeakable – andouillette, say, or the slop which is manouls – don’t cry out: “Christ, this is disgusting.” Instead, push it around the plate a bit and then say: “Just a little too feral for me.” This apportions the failings to oneself, leaving the dish blameless. The meal continues untrammelled, no-one’s offended and there’s every chance that the cheese section will compensate.

To finish, four points of etiquette regarding eating and drinking which might fox the British visitors. When pouring wine, glasses should be half-filled, at most. When toasting and clinking glasses (“Santé!”), you absolutely must make eye contact with your fellow clinker. At table, and when served food, don’t start eating until your hostess is seated and has said: “Bon appétit”. When not eating, keep your hands on the table, not on your lap. Oh, and don’t try to peddle water softeners.

What tips and tricks do you have for fitting in with French culture on holiday? Comment below to join the conversation