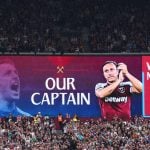 Mark Noble has admitted that there was one thing he would change from his 18-year West Ham United career.

The Hammers skipper will retire at the end of the season and he has just one more opportunity to add another appearance to the 549 that he has chalked up in the Claret and Blue already.

Noble’s last home game in a West Ham shirt came on Sunday against Manchester City and it was incredibly emotional for everyone involved with the club.

The 35-year-old’s first game for West Ham was way back in 2004 and he has given absolutely everything to the club since then.

Your Club’s SURPRISE Star This Season

There have been plenty of good times but a few really bad moments as well. So would Noble have changed anything?

The Hammers captain has been the club’s penalty taker for around 15 years now. He has scored 40 and missed five from his 45 attempted spot-kicks – not a bad record at all.

One miss was particularly painful though. David Moyes brought Noble on as an injury time substitute against Manchester United at the London Stadium back in September, specifically to take a penalty.

And Noble told Sky Sports on Sunday (May 15th, 1:53pm) how that is the one thing that he would change from his time playing for West Ham United:

“Probably the last minute penalty against Manchester United, I would have rather De Gea had dived the other way.”

It really was a devastating moment for everyone involved with the Hammers.

Noble would have undoubtedly have felt worse than anyone though, aside from maybe David Moyes!

The 35-year-old has always given 100% for West Ham though and nobody can ever question his commitment to this club.

It will be a sad day when he finally hangs up his boots. But the memories he leaves us with will last forever.

Don’t be sad it’s over…be grateful that it happened!

European football all but confirmed for West Ham next season