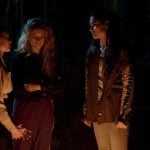 A year before Yellowjackets took the internet by storm in the fall of 2021, another show about a group of teen girls who crashland in the wilderness debuted on Amazon Prime Video. But unlike the breakthrough Showtime series, The Wilds largely flew under the radar. The show became lost in the shuffle of recent Lord of the Flies-esque series about survival, community building, and teen girl psychology, including Netflix’s The Society and Freeform’s Cruel Summer. Now back for a second season, The Wilds ups the stakes and attempts to make a bigger splash.

The series premiered in December 2020 with a now-familiar premise: a group of nine teenage girls board a plane headed for a young women’s empowerment retreat in Hawaii, but they never make it to their destination. The aircraft crashes, and eight of the nine teens survive past the first day. Throughout the first season, flashbacks and flashforwards à la Lost help viewers piece together the order of events and get to know their young heroines: loner Dot (Shannon Berry), wealthy cello prodigy Fatin (Sophia Ali), hopeless romantic Leah (Sarah Pidgeon), best friends from the same Ojibwe reservation Martha (Jenna Clause) and Toni (Erana James), sisters Nora (Helena Howard) and Rachel (Reign Edwards), and closeted Christian pageant queen Shelby (Mia Healey). Together, they survive until they’re “rescued”—weathering the elements, foraging for food, finding fresh water, and combatting their inner demons.

The story is fruitful ground for the writers to explore many popular assumptions about gender—and destroy them.

There’s a lot to love about The Wilds. Created by Sarah Streicher, whose writing credits also include Pixar’s latest feature, Turning Red, the series utilizes diverse voices to tell the stories of these teens from very different backgrounds. Most of the show’s writers and directors are women, and representation appears to be as important off-screen as it is onscreen. Saudi Arabian filmmaker Haifaa Al-Mansour directed the Season 1 episode focused on Fatin, and Navajo director Sydney Freeland helmed the episode centered on Martha, for instance. And while the show explores at times dark subject matter, it remains campy and fun. It’s peppered with instances of unrealistic teenspeak, welcome allusions to Lost (including a hatch and a referential shot of one of the boys lying on his back, staring up into the trees), and an episodes-long cameo from Ben Folds as himself in Season 2. Like other teen dramas (Riverdale, Gossip Girl, Pretty Little Liars), the series flirts with the absurd in the best way.

However, what sets The Wilds apart from other, similar “teen girls fending for themselves” shows is its hook (spoiler warning): Our plane crash victims aren’t truly stranded at all, but rather unwitting participants in an elaborate social experiment. Where Yellowjackets uses cultish gore and nostalgia to suck viewers in—with 1990s fashion, music, and even period-favorite actors—The Wilds’ peg is its twist. These teens haven’t landed on a deserted island by accident; rather, they’ve been chosen by psychologist Dr. Gretchen Klein (Rachel Griffiths) for an ethically questionable study, unbeknownst to them and their loved ones back home, including their parents. As some of the girls, mainly Leah, begin to question their circumstances, certain participants are revealed to be moles and others start to lose their grip on reality. As the first season progresses, the writers slowly reveal that despite getting “rescued” from the island, the girls are still in the experiment, held by Gretchen and a team of psychologists posing as FBI agents. Oh, and there’s another group of lab rats on a different island: boys.

While viewers learn that the crash is a farce early on, the scope and purpose of the experiment are fleshed out further in Season 2. The name of the fake women’s empowerment retreat Gretchen uses to lure the girls—“the Dawn of Eve”—offers a clue. The psychologist outwardly frames her experiment as an assessment of how a society would develop in the absence of patriarchy, using the boys—“the Twilight of Adam”—as a control group. In reality, however, the psychologist hopes to prove that women are superior community builders and leaders to men. Observing her test subjects using planted informants and hidden cameras, she compares the girls’ progress working together, building fires, and hitting certain other milestones to the boys’.

The premise is obviously outlandish, requiring viewers to ignore the existence of actual matriarchal societies that Gretchen could have studied, the unethical nature of the experiment, and the absolute lack of scientific validity of such a study in order to immerse themselves in the plot. However, the story is fruitful ground for the writers to explore many popular assumptions about gender—and destroy them.

The purpose of Gretchen’s experiment is to solidify the gender binary, albeit in service of the matriarchy, but the participants keep complicating her agenda. The series introduces the teens as archetypes only to have them break the mold. The girls are not always more compassionate and collaborative than the boys, and the boys are not always more volatile and violent. In a second season flashback, viewers learn that one of the stranded boys, jock Kirin (Charles Alexander, who gives a particularly strong performance), was suspended from his high school for hurling a slur at his gay classmate and fellow castaway Ivan (Miles Gutierrez-Riley). But audiences learn that the incident is more complex than it appears—Ivan comes upon Kirin when he’s upset and vulnerable and goads him into saying the slur, telling Kirin to repeat the words after him, so he can film it. And when another boy on the island Josh (Nicholas Coombe) is sexually assaulted by one of Gretchen’s double agents (in an upsetting and graphic scene), Kirin is the first to believe him and demand justice. The girls also contain multitudes, of course. Quiet, gentle Martha becomes the group’s main provider, hunting the wild animals that roam the island.

The Wilds ends up smartly critiquing Gretchen’s TERFy brand of feminism by poking holes in the validity of her experiment. (Transgender and nonbinary teens don’t seem to fit into Gretchen’s worldview at all.) The girls fail in ways she doesn’t expect, the boys succeed, and vice versa. The show never goes so far as to completely dismiss Gretchen’s underlying belief in the oppressive power of patriarchal systems, but  it exposes that the biased ends of Gretchen’s study don’t justify the cruel means. A real feminist wouldn’t torture unconsenting minors in service of the “greater good,” now would they?

The best of movies, TV, books, music, and more, delivered to your inbox.

We encountered an issue signing you up. Please try again.
Please enable javascript to use form.
By signing up, you agree to our Privacy Policy and Terms.

Thanks for signing up! You can manage your newsletter subscriptions at any time.

The writers know the patriarchy is bad, to put it simply, but they also identify gender essentialist views like Gretchen’s as a threat, rather than a solution to gender-based oppression. In Season 1, the writers illustrate how each girl on the island has somehow been effected by gender-based violence or sexist expectations: Martha was sexually abused by her physical therapist as a child; Leah was groomed by an older author she admired; Rachel developed an eating disorder in an attempt to acheive the “ideal” athlete’s body. The Wilds makes clear, too, that the boys have suffered at the hands of men in their lives and been held back by racism, homophobia, anti-immigrant sentiment, and expectations about what it means to “be a man.” What Gretchen doesn’t seem to understand—although the show’s writers do—is that while patriarchy hurts women, it hurts men, too. And people of all genders can build a better world together, if we do some deep unlearning.

Ultimately, The Wilds drives home that its exploration of gender is more than just a gimmick and that serious commentary exists beneath a preposterous storyline. The second season’s finale signals that the show may be headed off the deep end in Season 3, but I for one, can’t wait to dive back in. Viewers who love Yellowjackets but want to see teens obliterate the gender binary, rather than just invert it, should add The Wilds to their watchlists.