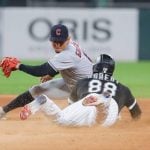 Let’s review some live props and futures courtesy of BetPrep’s gambling pro Brad Feinberg, who is 29-10 on his props that have been offered here at The Athletic to date. The futures of course are to be determined. But with futures, you can hedge your way to guaranteed profit once you have a future bet that’s near the finish line.

For example, Feinberg has the Heat at +475 to win the Eastern Conference. That leaves a lot of room to just bet the Bucks or Celtics against the Heat in the Conference Finals, depending on who advances. Yes, this cuts into your upside. But to quote Warren Buffett, “No one ever went broke making money.” The quandary for Feinberg is that he’s betting for a friend who wanted him to turn $2,000 into $1 million. He turned the $2,000 into $40,000 in one fell swoop when he hit on Cameron Smith to have the best round in the Masters in the third round, at 20-to-1. Now that’s rolled over into the Heat bet. The problem is, Brad’s friend doesn’t want to hedge. He has his eyes set on that milly. It’s like a game show where you can take a guaranteed $40,000 or let it ride for another spin at the wheel while the crowd is screaming at you to just cash out.

Let’s start with some props. BetPrep has a Prop Cheat Sheet that gives you each player’s current record of over a recent sample of games versus the day’s prop. It’s sorted so users can see who has the best records on either side of the over/under. Brad’s props here are more standing bets independent of these current trends that he keeps pounding because he thinks the odds are poor given the talent level of the respective players.

Juan Soto (+215 to get an RBI): “He’s arguably the best hitter in baseball and one of the best hitters at this stage of his career all-time. Remember, that Soto had the highest March full-season RBI O/U at 118 and of course, as is almost always the case (because of injuries), we bet the under. But he’s not injured now. So you’re saying he has about a 31% chance to get an RBI? That’s down from about 40%. There’s a disconnect here from March. I get that his leadoff hitter has gone from about a .400 OBP guy this time last year in Trea Turner to about .300 this year. Yes, he walks a lot. Still that was the case when his full-season RBI O/U was set. There is just too much value here. If you bet this every day at this price, I’m confident you’ll come out ahead in the long run.”

Luis Robert (+900 to get a SB): “It should be +750 at most. Now, you’re probably going to lose. But I expect to win this bet actually once every seven or eight times, not once every 10. And they’re paying us for once every 10. Robert already has six steals in 22 games and is not even getting on base much given how unlucky he is in batting average (expected average .357 according to Statcast vs. his .278 actual). This bet implies he’s a 15-20 stolen base guy over a full season and that’s crazy low.”

White Sox (+100 to win the AL Central): “I bet the Twins to win at a good number so now I’m just locking in profit, I hope, by hedging with the White Sox. I don’t consider the other teams legit contenders.” Feinberg adds that if the Twins lose Byron Buxton, they probably can’t win as they are about 25 games worse without Buxton per 162 games since 2019. “I also think the White Sox are a very good team with three dominant pitchers (Lucas Giolito, Dylan Cease and Michael Kopech) and they’ll get Lance Lynn back for the second half.”

Camilo Doval (+4000, NL Rookie of Year): “Why not in what looks to be a weak field? If Seiya Suzuki is just average relative to expectations, and Doval is a big-time closer for a playoff team, why can’t he win?” Since 2010, three of the 24 Jackie Robinson Award winners have been relievers. “This makes me like the bet even more. It makes me think it should be closer to +800 than +4000.”

Suns +333 to win the NBA Title. “You have to shop this. But it’s out there, especially now with the loss to the Mavericks in Game 6. Of course I’m worried about the Suns. But here’s the thing, if I lose this bet, I’m going to bet heavily on the Mavericks to beat the Warriors. The Mavericks I believe are clearly a better team than Golden State and the market doesn’t think so; so this is just teed up for us. And of course the Suns will beat the Warriors, too, I expect. So I feel I have this somewhat hedged.”

San Francisco 49ers under 10.5 wins: “This number is just crazy. Now if you tell me Jimmy Garoppolo is on the team, I don’t love the under. The number should be about 10 then; but of course there can’t be any ties at the casino, so they have to pick 9.5 or 10.5 and they went with the latter. However, Trey Lance is probably the starter and Jimmy G. is likely not even on the team in September. Maybe I’m nuts given how much fantasy football seems to love the idea of Lance, but with Lance in there, this to me is an 8.5/9-win team. You can’t argue there is way more downside with Lance, at a minimum. So no matter what, the number is at least somewhat of a value on the under side. But it’s a huge value, I believe, if Lance is the QB1, as expected.”