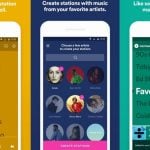 Spotify is shutting down Spotify Stations, its lightweight music streaming app, on May 16, according to emails being sent out to users.

The email is being shared across Twitter which explains both the standalone app and web-based player will no longer function. In fact, Spotify isn’t even waiting until May 16 to begin shutting down Stations as the app has already been delisted from the Google Play Store and the Apple App Store.

Spotify’s email goes on to clarify that the music stations will migrate over to the main app and recommends you move your favorites over.

We reached out to Spotify to ask why it was discontinuing Stations. Simply put, it was an “experiment” that ran its course. A Spotify spokesperson told TechRadar in a statement, “At Spotify, we routinely conduct a number of experiments to create better listening experiences for our users. Some of those tests end up paving the way for our broader user experience and others serve only as an important learning. Our Spotify Stations Beta was one of those tests.”

Spotify Stations first launched in January 2018 and it was pretty much the service’s version of Pandora. It had a wide variety of stations based on different genres, artists, or moods. You had almost no control over what you were listening to aside from basic curation features like favoriting songs.

The response from Spotify users has been overwhelmingly negative yet resigned. Commenters in the Spotify subreddit are disappointed Stations is going away because they enjoyed the stripped-down user interface. The UI took you straight to the music without having to navigate through menus. Some said it was a great way to find new music while others admitted it was a little wonky. The audio quality was bad and you couldn’t add a song to playlists on the base app.

With the discontinuation of Spotify Stations, there appears to be the start of a new trend among tech giants to consolidate their services under one roof rather than having a bunch of different apps. Spotify has already done something similar with the integration of its Greenroom feature into its main app, now rebranded as Spotify Live.

YouTube is doing something similar by getting rid of its lightweight YouTube Go app. It was deemed as “unnecessary” and encouraged old users to get the main app. It’ll be interesting to see if other services follow the same path. It would be great to have just one lightweight app with a ton of features instead of having several.