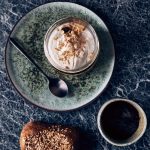 I make my way home past the northeast bay of Panormos, which overlooks an outcrop of rock rather cosmically called Planitis, topped with the remains of the Mycenaean tomb of Agia Thekla. Everywhere hangs that heavy Tinian scent of fleabane. Salt and olive, and the change of season. Skylarks rise from the sharp purple bramble spreading down the sheer cliff, and the sea slowly evaporates into cerulean. Not for the first time I think that this particular pocket of the Cyclades is the most romantic in the whole of Greece. This islet of swirling quartz crowned by a miniature temple. To the east, a tiny chapel clinging to the edge of the mainland—a wick burning in its window in a saucer of oil—over the deserted cove of Agia Thalassa, where the sand glows silver, like mercury. Like a transfiguration. And the row of marine pines before the surf, their needles bleached yellow, struggling to stand tall against the hard flat blade of the wind as they have for millennia.

Tinos ANM sits on a cliff with a view of the island of Planitis. Six bedrooms are arranged around a particularly fine pool. The outside dining room is the loveliest sun trap, and at night vast windows in the largest bedroom catch the lulling beat of a distant lighthouse.

Tinos AND is a hamlet of seven houses (from one to three bedrooms), all quietly designed in the stone of the island’s Byzantine-era farms and tiered into a hill with gardens, little freshwater pools, luminous views of 16 islands, and knock-out linen-mad rooms.

From about $1,920 a week; both this and Tinos ANM, above, are available through fivestargreece.com

A wildly successful conversion of a former bishop’s palace, Xinara House defines the small but grand village of Xinara. Sleeping up to 13, the place is a jewel box, from the Gilbert & George art to the jade pool scooped like an egg out of the rocks. Elegant, peaceful, and indulgent.

From about $4,100 a week for the main house; xinarahouse.com

Tinos has the best food in the Cyclades, and the island wines, from smart T-Oinos to the fantastic natural offerings from Domaine de Kalathas, are also superlative, with the stone and salt of the terroir drawn deep into the grape. Raki (made from grape stems and skins) is also especially good here—try any slug offered from a plastic bottle. In Panormos Bay, order mussels with coriander at Maistros and sardines baked with raisins at Maru. In Pyrgos, Athmar is the place for morning yogurt with local walnuts and field honey—and margaritas with thyme syrup. Isternia’s To Thalassaki serves clams steamed with ouzo and saffron, and onions baked with lemon. (Go early to swim first in the tiny bay.) O Ntinos in Giannaki Bay has the best sunset view, plus almond honey and vanilla ice cream. At Tarsanas in Chora, try the fried cheese. And order any of the “spoon sweets” in the roadside cafés—a dollop of homemade preserve (quince, sour cherries) is perfect with a short black coffee.

This article appeared in the April 2022 issue of Condé Nast Traveler. Subscribe to the magazine here.