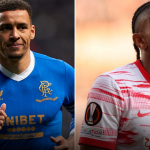 Rangers are looking to overturn a 1-0 deficit from the first leg as they take on RB Leipzig at home in the semi-finals of the Europa League.

Giovanni van Bronckhorst will hope the Ibrox crowd will be able to help his side secure victory in what is sure to be a high-octane encounter.

In the first leg, Angelino scored an 85th-minute winner for Leipzig, which has given Rangers much work to do. Given they look set to miss out on the Scottish Premiership title to Celtic, they will be especially determined to progress in this competition.

The winners will play either West Ham or Eintracht Frankfurt in the final.

MORE: Which teams are in the 2022-23 UEFA Champions League? Confirmed clubs, qualification rules and exceptions

How to watch Rangers vs. RB Leipzig

In the UK, the game will be shown live on BT Sport, while Paramount + will be providing coverage in the US.

DAZN will show the game in Canada, with Stan Sport having broadcasting rights in Australia.

Kemar Roofe is in contention to return for Rangers after recovering from injury. Aaron Ramsey could also be involved.

As far as Leipzig are concerned, Josko Gvardiol is a doubt but it is possible that he could still start. Christopher Nkunku, who has been linked with Manchester United, will be their main attacking threat.

Despite Rangers’ battling spirit, they could find matters difficult against a talented Leipzig team.