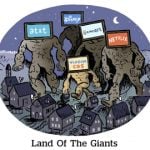 Streaming platforms have largely held their tongues because account sharing does have its benefits. For example, allowing people to share accounts helps grow a service’s audience base (although some promo subscription prices practically give the farm away).

But it’s costly. Research firm Parks Associates found that US video providers lost $9.1 billion to piracy in 2019 – and a third of that loss came directly from shared or stolen credentials, Marketing Brew reports.

It’s a slippery dance, though. How do you make users pay without driving them away? There are subtle, middle paths to explore before jumping straight to “Eff you, pay me,” which looks like it’s going to be Netflix’s approach.

For one, streamers can limit concurrent viewing. Hulu, for instance, limits simultaneous streams to two screens, and HBO Max alerts an account’s credit card holder once a certain number of households are using the same account (aka snitching on kids using their parents’ log-in).

Here’s an important question, though: Will these tactics work? Streamers might lose some viewers as they clamp down on overall account abuses, but they’ll also snag some new subs.

A bipartisan group of senators is set to introduce an advertising antitrust bill that would force Google to divest its ad tech business, among other far-reaching changes.

Amazon Advertising and the Meta Audience Network (it’s still FAN, too bad, Meta) would be in the same boat, since the bill would restrict companies with more than $20 billion in annual ad revenue from also owning ad exchanges or other tools to buy and sell ads, Bloomberg reports.

Companies with more than $5 billion in annual ad revenue would be compelled to “act in customers’ best interests” and provide more ad data transparency, such as the terms of winning bids and fees (ahem, the take rates) charged by the platform.

Details are fuzzy for now, because the news is attributed to two anonymous leakers. The text itself isn’t cited.

Although bipartisan laws are regularly floated or even brought to the floor, they can’t move forward without the necessary votes.

Still, this is yet another effort to throw open the Overton window on tech regulation and set the stage for a high-stakes lobbying campaign on the road to comprehensive federal legislation.

This doctor doesn’t think cookies are good for your health.

A couple of years ago, an emergency medicine physician who declined third-party cookies was unable to access a needed medical journal because of obscure site cookie rules. It wasn’t an emergency. He reverted to accepting cookies and, presto, he got access. But the experience stuck in the doctor’s craw, and he started a medical and health care data research program across Penn Med and Carnegie Mellon.

In its first year, the group mapped third-party data collection and tracking across online health sites and medical journals. The next step is to understand how the data could be used to make medical inferences and target ads.

Can someone’s browsing history suggest a possible diabetes diagnosis, for instance, and if so does that change the ads they see?

“We’ve documented over and over again that most health-related web pages have some tracking,” says Dr. Ari Friedman, who runs the program. “What are the implications of that?”

Why in-app personalization, not probabilistic attribution, is the future of post-ATT advertising. [Mobile Dev Memo]

The Out of Home Advertising Association of America launched a new brand “council” to help advance the OOH industry. [release]