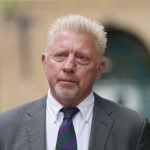 Boris Becker’s ex-wife has said telling their 12-year-old son that his father was going to prison was “the hardest thing I ever had to do”.

The 45-year-old Dutch model also told the TalkTV programme she “broke down” at the sentencing, and the first person who reached out to her was the tennis star’s current girlfriend, Lilian de Carvalho Monteiro.

When asked how she reacted at the sentencing, Ms Becker told TalkTV: “I completely broke down.

“I couldn’t believe what I was hearing because I was convinced, until the judge made her verdict, that he was going to get a little bit lighter than two and a half years.

“I had to keep it together and I don’t know how I did it.”

Ms Becker added: “We all pulled together – the ex-wife, the kids, his current girlfriend Lilian – the first thing we did was reach out to each other.

“It’s hard because everyone has an opinion about it, rightly so.

“I’m here to show everybody that he has a bunch of really strong women behind him, and who are here not to speak for him, but to protect him.”

Ms Becker said that telling their son two days later was “the hardest thing” she has ever had to do.

“We as a family had purposefully not spoken about the trial or anything.

“But I had no choice but to break my heart – or actually his heart – last Sunday.

“I don’t wish this upon anybody. It was the hardest thing I ever had to do.”

Ms Becker said her son is “dying” to see his father, and she hopes they can visit him in jail.

Speaking about Becker, she said: “Thank God his mental health is so strong and he’s probably prepared for these moments.

“Because life with Boris is never boring, it’s headline after headline.”

Ms Becker and the tennis star divorced in 2018 after nine years of marriage.

Judge Deborah Taylor, sitting at Southwark Crown Court on Friday, gave the six-time Grand Slam champion a 30-month sentence, of which he will serve half, for hiding £2.5 million of assets and loans to avoid paying his debts.

The 54-year-old three-time Wimbledon champion and former world number one was declared bankrupt on June 21 2017, owing creditors almost £50 million, over an unpaid loan of more than £3 million on his estate in Majorca, Spain.

The former BBC commentator transferred almost 427,000 euros (around £390,000) from his business account to others, including to Ms Becker and to his other ex-wife Barbara Feltus.

Becker, who was handed a two-year suspended sentence for tax evasion and attempted tax evasion worth 1.7 million euro (around £1.4 million) in Germany in 2002, was found guilty last month of four offences under the Insolvency Act between June 21 and October 3 2017.