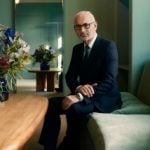 LONDON — Matchesfashion is making changes at the front and back ends of the business as it positions itself for digital and physical commerce in the wake of COVID-19.

After a two-year hiatus due to lockdown, the retailer is also resuming its partnership with Marie-Louise Sciò and taking Matches to Italy once again for a series of immersive consumer events.

Grand Tour Italy Part Two will see Matches host parties, dinners and pop-ups in Rome, Florence, Naples and Ischia, the sequel to an initiative that debuted in 2019.

Matches’ new CFO Murray hails from Farfetch where he was senior vice president of finance. He will start his new role in the autumn, succeeding Sean Glithero, who will be leaving to take a career break. Glithero had been with the business since September 2020.

Murray has 20 years of experience in the luxury and retail sectors, including three years at Farfetch, where he worked alongside the company’s CFO, with operational responsibility for all areas of finance.

Prior to Farfetch, he held senior finance positions at Amazon U.K., first as U.K. finance director for operations and then as Amazon Logistics European finance director.

De Cesare described Murray as “one of the luxury industry’s most respected finance professionals. He will provide us with invaluable e-commerce expertise.”

De Cesare said the next $100 billion of luxury market growth will come from further digital penetration, “and Dave’s vast experience in this area will be immensely valuable.”

In an interview this week, De Cesare said he’s been on a mission to attract top talent in digital, retail and fashion. The two new appointments are reflective of that.

De Cesare said Murray will be working on optimizing Matches’ supply chain, which accounts for one-third of the company’s costs in areas such as returns, duties and shipping.

De Cesare said supply chain is an area where there are “many opportunities and challenges,” and the aim is to figure out ways to serve the customer better, and save money.

Matches hired Harry, its new HR director, from Pandora. Harry has nearly 16 years of experience in HR roles at large retail companies, having started her career at Inditex, parent of brands including Zara and Massimo Dutti.

Asked why he made the HR hire, De Cesare said the market is a highly competitive one, and as Matches strives to become “the most aspirational multibrand fashion and luxury site” it needs to find, and retain new talent.

He also wants Harry to help “build a sense of belonging and mission” at the retailer.

As part of its growth ambitions, Matches is reprising the fizzy spring lifestyle event that it first launched in 2019. It will host the Grand Tour Italy Part Two in partnership with Sciò, the founder of Issimo and CEO and creative director of the Pellicano Hotels Group.

The three-part tour of Italy is meant to celebrate “the return of global travel,” and showcase Matches’ exclusive vacation capsules. The store will be hosting cocktails, dinners, private art tours, cultural experiences and pop-up shops on the peninsula.

The store said the journey will be captured in a “cinematic miniseries,” that will be shared with Matchesfashion on its media channels.

The retailer has collaborated with designers including Gabriela Hearst, Johanna Ortiz, Emilia Wickstead, Etro and Commas to launch more than 45 exclusive vacation capsules across womenswear, menswear and home.

The launch of Sciò’s and stylist Robert Rabensteiner’s vacation edits online, and at the Matches pop-up in Rome, will mark the first stop of the tour.

It will be followed by an event and installation at 5 Carlos Place in London before heading south to Florence and Naples.

The Matches pop-up in Rome will be on Piazza De’Ricci, near Piazza Navona. There will be a cocktail party and dinner at the well-known fish restaurant Pierluigi followed by a weekend of “shopping, eating and dancing” at La Posta Vecchia Hotel.

In Florence, Sciò and Rabensteiner will host a dinner at Palazzo Corsini, and there will be a series of cultural events for Matches VIP customers.

The last stop will be on the island of Ischia, off the coast of Naples, where Matches will host a four-day vacation residency at the Mezzatorre Hotel. Guests will travel by boat from Naples to Ischia for a weekend of shopping, eating and entertainment.

In 2019, the Il Pellicano x Matchesfashion.com Italian Grand Tour saw customers spend time holidaying on the Italian coast on a 1930s-era yacht that was transformed into a pop-up resortwear shop.

The boat sailed from Il Pellicano in Porto Ercole, Tuscany, to La Posta Vecchia, outside Rome, to Il Mezzatorre.