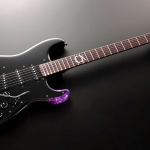 Created as a homage to the MMORPG, Fender says the guitar has been designed to capture the “originality, style and excitement of the game” through several visual design features.

It sports an all-black finish, with a couple of translucent blue and purple body segments intended to invoke Final Fantasy 14’s Crystals of Light and Darkness. A tone pot switch, which Fender calls the “limit break” as a reference to one of FF14’s combat abilities, also lets you put the bridge and middle pickups in series for a change of tone.

Its neck, meanwhile, features a meteor-shaped inlay in another nod to the series, and its neck plate on the back is engraved with the FF14 logo. It even comes bundled with an exclusive set of “shard” plectrums, a certificate vouching for its authenticity, and an art card.

The Final Fantasy 14 Fender Stratocaster will cost you a pretty penny, though. You’ll have to shell out $3,499/ £3,199 / AU$6,499 for the instrument, which was originally revealed back in May last year, but has finally gone on sale now.

A thing of beauty

As limited-edition video game paraphernalia goes, this guitar isn’t half bad. It’s sleek, it’s minimalist, and even the wackier parts of the design – like the strange crystal-effect body edges – aren’t too gaudy.

As a fellow Strat player, I’d love to take it for a spin. The C-shape neck suits me well, and while I’d prefer a maple neck, what single-coil guitarist wouldn’t want the option to add thick, humbucker tones at the flick of a switch (or the pull of pot)?

Its price isn’t doing it any favors, though. An American Original Fender Stratocaster will set you back $2,099.99 / £1,849 / about AU$2,946 – meaning you’re paying almost double for the Final Fantasy branding. Some of the electronics inside will be different and arguably better if they fit your sonic palette, but I reckon you’re better off spending the same money at the Fender Custom Shop to get a fully bespoke instrument.

I’ll stick with my Mexican Strat for now. Maybe I’ll pick up a few Final Fantasy stickers to plaster over its body. I’m sure that’ll look really cool.