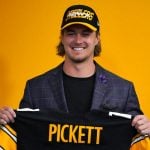 That’s why the one quarterback drafted in the first two rounds leads the odds at BetMGM to win NFL Offensive Rookie of the Year, even though he’s far from certain to start early this season.

Kenny Pickett of the Pittsburgh Steelers is the co-favorite to win offensive rookie of the year. He is joined by Atlanta Falcons receiver Drake London. Both have +650 odds to win.

Pickett is the co-favorite to win the NFL’s top rookie honor, but he doesn’t even have a starting job.

Kenny Pickett could start right away

Pickett wasn’t considered to be a ready-made starter coming into the NFL draft. However, he did land in a decent spot.

The Steelers are replacing Ben Roethlisberger, who retired after last season. They signed Mitchell Trubisky, but his contract (two years, $14.3 million) is high-end backup money. Trubisky is still likely to start the season, but Pittsburgh coach Mike Tomlin didn’t rule out Pickett being the starter on opening day.

“[Pickett] certainly has a chance [to be our Week 1 starter],” Tomlin said to NFL Network’s Rich Eisen during Saturday’s coverage of the draft. “I agree with that sentiment of his readiness from a professional perspective.”

There’s a long way for that job to be settled, and first-round quarterbacks almost always start at least one game as a rookie. Pickett will likely get a chance at some point. But the question for bettors is if he’ll start soon enough to win Rookie of the Year.

Pickett is the only quarterback that went in the first two rounds, and voters will select a quarterback if they can. Pickett likely wouldn’t have much competition among rookie quarterbacks for Rookie of the Year, unless someone else from the third round or beyond surprisingly starts.

Odds for NFL Offensive Rookie of the Year

Here are the post-draft odds among the top 10 favorites for Offensive Rookie of the Year at BetMGM:

London is tied with Pickett because he was the first skill-position player selected. He should get a lot of targets, considering the Falcons don’t have a lot of competition at receiver.

Burks is an interesting choice. He was drafted with one of the picks the Tennessee Titans got in the A.J. Brown trade, and he also could get a lot of targets in that offense.

Moore is another interesting pick, simply because he’ll be playing with Patrick Mahomes and the Kansas City Chiefs. Kansas City isn’t particularly deep at receiver, so Moore has a shot for a lot of playing time in a great offense. The same argument can be made for Christian Watson and the Green Bay Packers.

There wasn’t one or two standouts among the skill-position players in the draft, and that’s a reason no player is shorter than +650 odds to win offensive rookie of the year. If you believe a quarterback will win no matter what, you can gamble on Pickett and hope he gets the starting job soon.