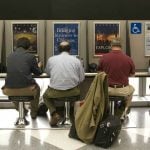 In this week’s roundup, airlines and corporate travel managers report that a long-awaited revival of business customers is finally starting to happen; Southwest, JetBlue and Alaska will reduce their schedules as they struggle to add pilots and other employees for the summer travel boom – and to pacify restive labor groups; United, Delta and Air France bring back some international routes; French Bee starts flying to Los Angeles; United and Singapore expand their code-sharing arrangement; United plans to install Polaris seating in the one remaining widebody aircraft type that doesn’t yet have it; Elon Musk gets into the in-flight Wi-Fi business; Chicago O’Hare’s people-mover finally returns to full service; CLEAR’s expedited security lanes come to an eighth California airport; and Long Beach opens a new ticketing and check-in facility.

Leisure air travel has been rebounding strongly in recent months as COVID concerns wane and pent-up demand for vacations takes hold, but what the airlines really want to see is a revival of business travel, since it accounts for the bulk of their passenger revenues. And it looks like that is finally starting to happen. The Global Business Travel Association (GBTA), a trade group of corporate travel managers, summed up the results its April membership survey like this: “Business travel is surging forward, international travel is returning and despite new challenges, industry recovery is entrenched. In addition, corporate travel policies are undergoing a revamp and employees are broadly willing to travel for business.”

Business travel still isn’t back to pre-pandemic levels, GBTA said, but the momentum toward a recovery is strong. According to its April survey, of those companies that had suspended or canceled most trips during the pandemic, 75% say they will resume domestic travel and 52% will revive international trips in the next one to three months. The proportion of companies that allow non-essential domestic business trips is now 86%, up from 73% in February, GBTA said, while 74% now permit international travel vs. just 48% two months earlier. Most respondents (88%) said their air travel bookings increased in the past month, vs. just 45% who said so in February.

In reporting their quarterly results this week, executives at the largest U.S. airlines have made similar observations. According to Business Travel News, United Executive VP Andrew Nocella said large corporations “are now returning to travel at a faster rate than small businesses … Now with business traffic rapidly recovering, I expect United to have a tailwind versus more leisure-focused carriers.” American Airlines CEO Robert Isom said corporate bookings are currently “at the highest they’ve been since the onset of the pandemic, and we expect that to continue as more companies reopen their offices … We anticipate overall business revenue to be 90% recovered” in the second quarter.

And a report this month from the consulting firm Deloitte, based on discussions with 150 company travel managers, was also optimistic, especially as more COVID-related restrictions on travel fall away. Over the rest of this year, Deloitte said, “Team meetings that have been postponed multiple times will finally take place. More conferences will shift back from online to in-person, and those that already have will likely see attendance improve. Even international trips should grow significantly, although some regions will recover faster than others.”

The latest U.S. carrier to resort to major schedule cuts as the summer season approaches is Southwest, which will reportedly slash more than 119,000 flights from its June schedule – a reduction of 6.9%. The biggest shrinkage will be at Denver International, which will lose 814 June flights or almost 10% of its Southwest service that month. Southwest recently announced schedule increases on some California routes, including San Jose, and those will remain in effect. Southwest CEO Bob Jordan said this week the airline’s priority now is “getting properly staffed and returning to historic operational reliability,” noting that the company added 3,300 employees in the first quarter.

JetBlue this week confirmed earlier reports that its summer schedule is being cut by more than 10% from its previous plan. That means its operations will be anywhere from 0% to 5% above 2019 levels, although the company had been planning to increase its capacity by 11% to 15% over that pre-pandemic year. Last month, JetBlue dropped more than two dozen pandemic-era routes from its network, and now – according to Simpleflying.com – it is eliminating several more, including summer service from New York JFK to Boise, Idaho and Kalispell, Montana. And Alaska Airlines is planning to trim its capacity by 2% through the end of June “to match our current pilot capacity,” the company said.

Airlines are having trouble maintaining their summer schedules largely due to staffing problems, especially a shortage of pilots. Southwest’s pilots and flight attendants complained to management this month that they are overworked and exhausted, and they asked the company not to schedule more flights until it can properly staff them. JetBlue said this week it is “working through a backlog of pilot training and re-certification flights after delays from Omicron. Volatile pilot attrition is also creating a need for additional recruiting and training capacity.” The airline increased its pilot training team and simulator capacity to meet the demand. JetBlue’s relations with its pilots are currently strained at best. The pilots’ union at JetBlue has complained to management about the company’s executive in charge of airports and system operations, essentially blaming him for “months of disruptions” in the airline’s flight operations and for “customer and pilot frustration at the operational turmoil.” And at Alaska Airlines, members of the pilots’ union are weighing a strike authorization vote to give their leaders extra leverage in contract negotiations; union members have been conducting informational picketing at airports in recent weeks.

United Airlines is continuing its international service resumptions and expansion on more routes. This week United started flying once a day from its Newark hub to Nice, France. Last month, United revived San Francisco-Tel Aviv service, and on May 4, the carrier is due to increase frequencies on that route from three flights a week to seven. May 5 is the launch date for United’s new route from its Washington Dulles hub to Amman, Jordan, where it will operate three flights a week. And on May 6, United begins daily flights from Chicago O’Hare to Milan, Italy.

Delta and its partners are also ramping up their transatlantic schedules. On May 1, Delta will start flying five times a week from New York JFK to Edinburgh and resume daily service from Boston to Rome. On the same date, Delta will return to the Atlanta-Milan route, which it last flew in 2019, and will resume non-stop service from Atlanta to Athens. On May 3, Delta is due to resume service from Portland to Amsterdam. Delta’s SkyTeam partner Air France has set May 3 for the resumption of its Denver-Paris CDG route, with three weekly 777-200 flights. In other news, the South African government has given Delta a green light to start flying to Cape Town as an extension of its existing Atlanta-Johannesburg service; Delta is expected to start flying the triangular route sometime later this year.

Meanwhile, Paris-based French Bee – which flies between Tahiti and Paris via San Francisco — kicks off new service on April 30 between Los Angeles International and Paris Orly. It will use an Airbus A350-900 to operate three flights a week, building up to six a week by July, with one-way fares starting as low as $321 in basic economy. American Airlines, which recently resumed service from its Charlotte hub to Frankfurt, has now decided to suspend those flights from June 3 through Sept. 6.

Although United introduced its Polaris international business class product six years ago, there’s still one twin-aisle aircraft type in its fleet that hasn’t yet received a makeover with the posh front-cabin seating: its 16 Boeing 767-400s, which it took on during its 2010 merger with Continental. But according to The Points Guy, that is about to change. A United official told the website the first of those planes should be refitted with Polaris this summer; it was not immediately clear whether premium economy seating would also be added to the aircraft. United’s 767-400s had been grounded during the pandemic, but it decided to bring them back after international traffic started to pick up.

Elon Musk’s deal to buy Twitter was big news this week, but another Musk company just inked a deal with an airline. Hawaiian Airlines said it will use Musk’s Starlink satellite internet network, part of his SpaceX operation, to provide in-flight Wi-Fi for its transpacific fleet – a service the airline doesn’t currently offer. But it won’t be available right away; installations on Hawaiian’s A330s, A321neos and new 787-9s won’t begin until 2023. The Starlink Wi-Fi will be fast, simple – and free for passengers, Hawaiian said. “Guests will be able to stream content, play games live with friends on the ground, work and collaborate in real-time, plan their Hawaii vacation, or share their special island moments on social media,” the airline said. “Connecting to the internet will be seamless when guests walk on board, without registration pages or payment portals.”  The California-based regional carrier JSX said on Twitter last week that it will also provide Starlink in-flight Wi-Fi to its customers starting “later this year,” and it will also be free. Meanwhile, Delta CEO Ed Bastian said in a Wall Street Journal interview that his company has conducted some exploratory tests of Starlink’s Wi-Fi capabilities but declined to offer details.

Last fall, Chicago O’Hare Airport’s people-mover line – called the Airport Transit System (ATS) – resumed limited operations after being shut down for many months in order to expand and modernize the operation. Now, airport officials said, the ATS has finally come back to full, around-the-clock service, so O’Hare is no longer using the buses that had replaced it. The ATS carries passengers around the airport, linking Terminals 1, 2, 3 and 5 with O’Hare’s Multi-Modal Facility (MMF), which houses rental car companies, an economy parking lot, and links to local and regional bus and rail services. “The ATS reduces road congestion and emissions, as fewer cars and buses are needed to travel between terminals, parking lots and ground transportation facilities,” the airport said. “Each three-car train can carry 147 passengers, with service operating every three minutes. The three-mile trip between Terminal 1 and the MMF takes only 10 minutes, with five total stops.”

CLEAR, the company that uses biometric technology to give its members expedited access to TSA security screening, is now available in Terminal 2 at San Diego International, its eighth airport in California. Members submit to an eye scan for identity verification and then are escorted by a CLEAR rep right to TSA screening. Membership costs $15 a month, billed annually, but is also available at a discount to loyalty program members of Delta, American and American Express. With San Diego, CLEAR is now in place at 43 U.S. airports; other California locations include San Francisco International, Mineta San Jose, Oakland International, Sacramento, LAX, Ontario, and Palm Springs.

Elsewhere in southern California, Long Beach Airport has set a May 4 opening for a new ticketing lobby, part of its $110 million Phase II Terminal Area improvement program. The 16,700-square-foot facility will replace ticketing and check-in facilities located in the airport’s historic terminal building, which is due to undergo renovations and will eventually be used for car rental services. The new building has common-use ticket counters and check-in kiosks that can be used by all airlines, and a new behind-the-scenes TSA baggage screening facility. Later this year, the airport will open a new consolidated baggage claim facility.