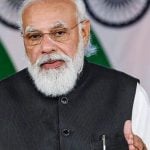 Prime Minister Narendra Modi’s visit to France will carry forward the high-level engagement between the two countries post the French Presidential elections, Foreign Secretary Vinay Mohan Kwatra on Sunday ahead of the prime minister’s three-nation tour in Europe. This tour comes a few days after Macron’s victory in the French presidential elections. Regarding the visit, PM Modi mentioned that the two countries must work in close cooperation. Apart from France, the PM will also visit Germany and Denmark.

Regarding PM Modi‘s visit to France, Kwatra, who has been newly appointed to the post, noted that France is an important partner of India in Europe and currently holds the EU presidency.

“President Macron has just won the elections. India-France friends and strategic partnership has seen a great momentum, thanks to the leadership of Prime Minister Modi and French President Macron, as also their close friendship,” Foreign Secretary said.

“Prime Minister’s visit to France will carry forward the high-level engagement between the two countries post the French Presidential elections,” he added.

“Both countries have continuously nurtured and delivered on the ambition of their strategic partnership, particularly in the area of clean energy and environment, people to people ties, digital and manufacturing in high-end sectors,” he also mentioned.

Meanwhile, the prime minister also mentioned that the visit will bring an opportunity for both the countries to set the tone for the next phase of the India-France Strategic Partnership. “President Macron and I will share assessments on various regional and global issues and will take stock of ongoing bilateral cooperation. It is my firm belief that two countries that share such similar vision and values for the global order, must work in close cooperation with each other,” he said in his departure statement ahead of the three-nation visit.

The Prime Minister noted that his visit to Europe comes at a time when the region faces many challenges and choices.

“Through my engagements, I intend to strengthen the spirit of cooperation with our European partners, who are important companions in India’s quest for peace and prosperity,” he added.

* Thank you for subscribing to our newsletter.