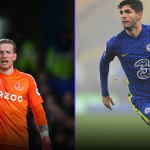 Everton take on Chelsea this Sunday at Goodison Park in a match that could hold significant consequences at both ends of the Premier League table.

Frank Lampard’s men come into this one in desperate need of three points, as they battle to stay in the English top flight. Winning just two of their past five games, the Toffees are in the drop zone and will be looking to get some points on the board to put pressure on relegation rivals Burnley and Leeds United.

On the other hand, visitors Chelsea will be keen to strengthen their credentials of finishing in the top four of the Premier League and secure UEFA Champions League qualification for the next campaign. The Blues have stumbled to a defeat and a draw in their previous two outings and will look to get back to winning ways against an Everton team low on confidence.

This match promises to be an intriguing contest, with Lampard set to face his old club for the first time in the Goodison Park dugout. Both sides possess very little margin for error, setting the scene nicely for a lively battle on Merseyside with plenty at stake.

MORE: How much have Manchester City spent on their current squad?

How to watch Everton vs. Chelsea

In the US, televised Premier League games are also available on fuboTV, which also offers a free trial to new subscribers.

In Canada, every Premier League game streams live on DAZN.

Everton have a depleted squad coming into the clash, with numerous first-team stars out due to injury.

Andre Gomes, Donny van de Beek and Ben Godfrey will all miss the match, whilst Andros Townsend, Nathan Patterson and Tom Davies are all longer-term absences as they recover from more serious injuries.

On a more positive note, striker Dominic Calvert-Lewin and defender Yerry Mina should both be fit to play.

For Chelsea, Ben Chilwell, Callum Hudson-Odoi and Mateo Kovacic remain out for a prolonged period of time and will not take part against Everton.

Ross Barkley and Andreas Christensen should be back in contention after missing the draw at Old Trafford due to illness, whereas Reece James and Antonio Rudiger are expected to be fit after making their injury comebacks in the score draw against the Red Devils.

It’s not surprising to see the bookies expecting this to be a tough day for Everton. To be priced so highly against a home win gives you some indication as to how their season has gone.

Since backing Chelsea for a simple victory is less appealing, consider looking at both teams to score here: Everton’s defence will likely struggle to keep out the visitors for long, while Chelsea have themselves conceded nine goals in their most recent five league matches.