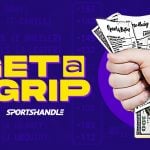 It’s information overload everywhere, and there’s not time enough to sleep and eat and stay fully apprised of what’s happening on this crazy blue dot of ours (two out of three ain’t bad). Here’s the weekend Sports Handle item, “Get a Grip,” recapping the week’s top U.S. sports betting stories, highlighting some fresh news, and rounding up key stories.

Top stories around our network this week

It’s been a wild week in state legislatures around the country, where bills on sports betting were considered, advanced, and killed.

In the early hours of the morning Friday, the Kansas legislature voted to send a bill legalizing sports betting to the governor. A Minnesota bill made progress this week as well.

But there were also entries in the loss column, as the Massachusetts Senate passed a bill that is so unlike its House counterpart that it seems unlikely sports betting will be coming to the Bay State anytime soon. Missouri, meanwhile, had its sports betting bill die via the filibuster Thursday.

Return of the Mack

Will everyone please stop calling “Mattress Mack” a sports bettor?

After Blackmon, MLBPA dealing with agents “champing at the bit” to sign brand ambassador deals

In the App Store

War, what is it good for?

Not so many long balls

Why can’t you bet on bowling?

Dave Binder Research on Friday morning released results of a poll it said shows broad support for the California Solutions to Homelessness and Mental Health Act, a corporate-backed initiative that would allow for statewide digital wagering. The proposed referendum is still in the signature-gathering stage.

According to research conducted March 28-April 4 on the proposal from commercial operators to legalize mobile sports betting, 59% of voters polled said they would vote yes, 28% no, and 13% were undecided. The initiative is backed by a coalition that includes major national operators such as BetMGM, DraftKings, and FanDuel.

A press release said pollsters also did a simulated “November contest” that showed “yes” votes would continue to maintain a “double-digit lead” over “no” votes. The results are in contrast to a poll put out by FM3 Research last week, which suggested that 53% of those polled oppose the “corporate online sports betting ballot initiative” based on its title and summary.

Currently, only one initiative has qualified for the November 2022 ballot, a tribal-backed proposal that would allow for wagering only in person at brick-and-mortar casinos and racetracks. Tuesday is the deadline for the operators’ group to submit the nearly 1 million signatures needed to get on the ballot. A third initiative, backed by three tribes, would also allow for statewide mobile wagering and is also in the qualification process.

The NCAA informed its member institutions Thursday that it would now be permissible for individuals, institutions, or conferences to provide “competition statistics” to companies involved in sports wagering, provided that same data is available to the general public.

The rule clarification, which was sought by the Mid-American Conference after it inked a data deal with Genius Sports, seems to break down the wall prohibiting direct interaction between college programs and sports betting entities. However, there could still be some question as to who is most entitled — conferences, schools, or individual athletes — to sell or license competition statistics, as the explosion of Name, Image, and Likeness deals continues to give athletes more control over their individual data and destinies.

Just days after a bill was introduced in Colorado to use at least $2.5 million to fund programs to address problem gambling, the legislation is now in its third committee in the state’s House of Representatives.

The bill had a hearing Thursday in the House Finance Committee, where testimony was offered by proponents who included the bill’s sponsor, Speaker of the House Alec Garnett; Colorado Division of Gaming Director Dan Hartman; and advocates for responsible gambling. It was advanced to the Committee on Appropriations on a 9-2 vote.

A Maryland lottery meeting came and went this week without much relevant sports betting news, but a few tidbits of information were worth noting from the Old Line State.

Hollywood Casino Perryville’s permanent retail Barstool Sportsbook is under construction, and the casino’s vice president of operations, Timothy Shea, told Sports Handle the project should be completed by mid-June.

Former Notre Dame and NFL offensive guard and TV personality Mike Golic Jr. and partner Brandon Newman on Monday will debut the GoJo podcast in partnership with DraftKings. The hour-long podcast will touch on “the hottest topics across sports and culture that appeal to the everyday fan and those with skin in the game,” according to a DraftKings press release.

The five-day-a-week podcast will be available via Apple Podcasts, Google Podcasts, and other sources. The podcast is the latest in a series of recent media ventures and partnerships from DraftKings, including The Dan LeBatard Show, a relaunch of the GM Shuffle, and Mike Golic Sr.’s Golic and Smetty, with Jessica Smetana. Baseball personality Jared Carrabis is also partnered with DraftKings.

More of the most important, interesting stories