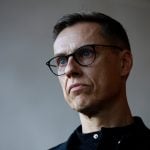 Alexander Stubb now works as a professor and director of the School of Transnational Governance in Italy.

In a political and public service career he has served as Prime Minister of Finland, and various ministries in finance, foreign affairs, trade and European affairs.

He has also served as an MEP and chairman of the Finnish National Coalition Party and as vice president in the European Investment Bank.

Before his political career he was a Government advisor in Finland’s Foreign Affairs ministry and on President Romano Prodi’s team at the European Commission.

He was heavily involved in the negotiation of the Treaties of Amsterdam, Nice and Lisbon and has a strong experience in the vagaries of a proposed European shared defence strategy.

When he spoke to The Journal earlier this week the self professed sports-nut and amateur triathlete said he was frustrated by a bout of Covid-19.

But the illness has done little to dent his commentary on Russia and the new found fervour in Finland to join NATO – a move that Stubb believed was unachievable just a few years ago.

“I’ve been an advocate for Finnish NATO membership, basically, since 1995. I think we should’ve joined at the same time when we joined the European Union, because for me that was a moment when we truly dropped neutrality and became a part of a political alliance. Be that as it may, there were times when I lost faith, especially after 2008,” he said.

That was during the Russian war with Georgia when Stubb worked as a mediator as his country and others tried to find a peace settlement.

Stubb said that he believed the Georgian war would have reignited a desire in the Finnish population to join the NATO alliance prompting him to make an impassioned plea in a much publicised speech.

“I warned about the reemergence of Russian aggression and spheres of interest and calling for Finland to rejuvenate the base for NATO membership. But unfortunately, there was a lot of pushback at the time.

“I can imagine that the situation is a little bit like someone in Irish politics, rejecting neutrality a few years back,” he added.

Stubb is now watching as his own country sides with the NATO alliance in the wake of Russia’s landgrab in Ukraine.

Public support for joining NATO has doubled from 30% to 60% according to a series of polls.

The Nordic nation of 5.5 million has traditionally been militarily non-aligned, in part to avoid provoking its eastern neighbour, with which it shares a 1,300 kilometre border.

“But now that things are moving quickly. I’m obviously pleased, but it’s not so much, being pleased about the fact that I was right, it’s more about, you know, the capacity of Finnish people and Finnish political leadership to change tack when the situation on the ground changes.

“Ideology is never a good driver of security. It needs to be based on pragmatism and Finns are very pragmatic,” he explained.

The Finns have a long history of fighting and battling their bigger neighbour – much like the Irish.

In a whistle stop tour of Finnish history he referenced the 1809 separation of Finland from the Kingdom of Sweden as his country maximised their autonomy.

He believes there were similarities to how his people and Ireland focused on their culture and language and “their uniqueness” at that time.

He referenced how in 1944 that the country lost 10% of its land masse to Stalin era Russia in the area where his grandfather and father were born. He said Finn’s “reluctantly” sued for peace while still fighting the Russian invaders.

He spoke about how, in 1992, his country took the leap and joined the European Union just months after the collapse of the Soviet Union.

The former Finnish political leader said that he does not worry for his country in the current geopolitical atmosphere informed by Russian aggression.

“These are the moments you prepare for,” he said mentioning the massive armed forces his country has funded and established to deal with the Russian threat.

“I joke around that both of us have, and I mean this in a very much tongue in cheek way, but both of us have a big neighbour in the East. But I think yours is manageable, ours is not. The basis of security is linked to its geography and linked to history,” he added.

Through out the interview Stubb mentions the problem of convincing his country to align with other countries – that was until Russian tanks and troops flooded across the Ukrainian border on 24 February.

He believes that there needs to be an acceptance by all countries that the geopolitical protection of neutrality for small sovereign States has changed.

“In my mind neutrality is a thing of the past,” he said.

Stubb was anxious to stress that he did not wish to get into offering advice to the Irish Government – “because I am convinced that they know what they are doing”. He said he counts Micheál Martin and Simon Coveney as friends.

He was also anxious not to discuss Ireland’s opt out from membership of a common defence policy contained in Article 42(7) of the troubled Lisbon Treaty in 2007.

“But in today’s world where you kind of have to take sides it’s a difficult concept to explain.

“Every country has to go through that path of explanation for themselves, I’m sure without knowing or understanding or giving any advice, this is a debate that Ireland will go through.

“But the feeling that I had in Finland, about NATO membership was that there was a point where I simply got tired of the quality of the debate, and in many ways, that I just felt that it’s better to drop it.

“But then there are always these moments in history when you realise well, actually, now is the best time to have the conversation, and perhaps one of the things that you guys need to figure out is this is now the right moment,” he added.