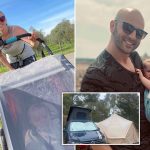 They family is currently touring Italy in their VW van (Picture: @baby_vanventure/Caters News)

At just five months old, Benjamin may well be the youngest member of the #VanLife lifestyle, with the globetrotting tot already experiencing French ski resort Avoriaz and Italy.

His parents, 33-year-old Emma and Chris Glebocki, decided to rent out their home in Hertfordshire on AirBnb in order to fund their trip.

Living out of a VW Explorer van, the trio have been on the road since March — with little Benjamin hitting his milestones in the most cosmopolitan way possible.

‘Benjamin has also had his first sea swim on the Amalfi coast, paddled in Tuscany thermal pools, charmed Italians on many a buses, trains and ferries,’ Emma said. ‘He has also accompanied up wine tours and pesto making classes.’

Emma and Chris found that they missed travelling hugely during Covid — so when Emma was pregnant, she and Chris vowed to go travelling with the baby and their dog, Harris, as soon as possible.

‘We had seen people doing it on social media, so we thought where there is a will there is a way and decided to just go for it,’ Emma said.

Their van is kitted out with a kitchen, hob, bedroom, seating area, and detachable yurt. (Picture: @baby_vanventure/Caters News)

Planning a trip is always going to be challenging — but for Emma, planning to travel with a baby involved extra hurdles and organising in advance.

‘I needed to plan for everything he would need in the next few months for his future development stages.

I was researching for what he will need at six months when he was just six weeks old, and I was buying him a six to nine-month old spring wardrobe in the middle of winter.’

According to Emma, some people thought they were naive for going travelling with a young baby — but with their kitted-out van, they have a whole routine going.

Their van consists of a bedroom area, seating area, and a kitchen area including a sink and a hob. Once they put Benjamin to bed in the van at 7pm each night, they head to the yurt, which attaches to the van and acts as a living space in the evenings.

By spending his formative years on the road, Emma hopes that Benjamin ‘won’t be phased by anything when he’s older’.

‘He takes naps in there during the day and when he isn’t sleeping he is looking around and taking it all in,’ she said. ‘He’s already experienced so much, including trains, metros, waterfalls, sightseeing and hikes.’

The family have even hiked up Mount Vesuvis with Benjamin strapped to Chris’ back.

By travelling together, the couple say they’ll never miss any of their baby’s milestones. (Picture: @baby_vanventure/Caters News)

‘We both get to see everything together, especially in terms of Benjamin’s development,’ Emma added. ‘Neither of us will miss a moment.’

She hopes that as Benjamin gets older, he’ll be able to look back at his #VanLife days fondly.

‘The memories we will have with Benjamin will be incredible,’ she said. ‘Being away and travelling has made me so much more relaxed as I am spending constant quality time with my husband, baby and our dog.’

Being new parents on the road isn’t easy, but Emma said she and her husband have enjoyed every moment.

‘As time goes on, we are getting used to things,’ she explained. ‘We have a few bad days among the good too, but we just talk about the things that haven’t gone to plan and work out how we will do it differently.’

‘It has been an amazing experience so far.’

Get in touch by emailing [email protected].

MORE : 13 packing hacks to make the most of your travel luggage allowance

MORE : Woman travels all over Europe by swapping her home with strangers

Get need-to-know travel news, inspiration and advice from Metro every week.