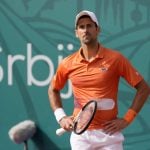 The ATP heads to Spain for the Madrid Open, the second ATP Masters 1000 event of the clay court season. The last few months have been one of the best stretches of tennis we’ve had in some time, surely since the start of the pandemic.

For one, Rafa Nadal had a 20-0 win streak that resulted in three titles, including the Australian Open for his 21st Grand Slam championship before losing to American Taylor Fritz in the BNP Paribas Open Final in mid-March. The thing is, we haven’t seen Rafa since. After Indian Wells, Nadal took some time off citing a rib fracture that forced him to miss the Monte Carlo Masters and Barcelona Open. However, he is back in the draw in Spain after some time away and looking to win his first Madrid title since 2017.

Though it is clay, this is Madrid and altitude becomes a factor. The elevation means the air is thinner, which allows the ball to travel with more pace. There are two types of players who can win this event. Those with a power serve and power ground stroke game like reigning champ Zverev, or those that are really good counter strikers like Djokovic.

Let’s break down the draw.

Novak Djokovic has had an up and down ATP season. (AP Foto/Darko Vojinovic)

Djokovic has now played eight matches in 2022 after missing events due to his vaccination status. He has gone 5-3 in those matches and 3-2 on clay. In the Serbia Open last week, Djokovic had a pattern: lose the opening set, go on to win the match. That is, until he lost to Russian Andrey Rublev in the final, getting wrecked in the third set 6-0.

Djokovic said an illness led to his fatigue, which could very well be the truth but his three-set pattern could also be a sign that he’s still finding his groove this year after some time off. Djoker holds three titles in Madrid with the last coming in 2019. If he finds himself in better shape this time around, he could face 18-year-old phenom Alcaraz in the semifinal or … Nadal.

How healthy is Nadal? In a post announcing his return, Nadal said that “despite having a short preparation,” he was ready to play at home and that he would do his “best.” However, his draw is tough for someone that has been out for a month recovering from a fracture on short prep time.

Right out of the gate, Nadal will face a player to watch in Kecmanovic. The Serbian definitely has been making some noise but perhaps is still under the radar having made five straight quarterfinals in Rio, Chile, Indian Wells, Miami, and Serbia, losing all five before breaking through to the semis this week in Munich. Three of those five losses, however, were to eventual BNP champ Fritz, eventual Miami champ Alcaraz, and to world No. 1 Djokovic. Now the 22-year-old is coming into this event with some momentum while catching Nadal off some rest time. Now, I’m not calling for the upset, but it is a challenge for a first match back.

If Nadal gets through, he could then face another formidable opponent in fellow Spaniard in Pablo Carreno Busta to then potentially face Alcaraz in the quarterfinals and maybe Djokovic in the semis. It’s not an easy draw if Nadal were healthy. It’s especially not an easy draw coming back from injury.

My mind would be blown if Nadal won this event. His last win here came in 2017 and in his last three appearances, Nadal has not reached the finals, losing in the quarters twice and semis.

The bottom half of the draw is a lot less interesting. You have players with either less experience or less success on clay, and then some players who could make noise like Italian Jannik Sinner, if he were healthy. Sinner has both withdrawn and retired from matches this year. Zverev is the reigning champ and also won in 2018. He has a friendly draw to make another deep run, at least to win his quarter.

The question mark becomes Tsitsipas, the Greek who has now lost three times to Alcaraz and once on clay. Tsitsipas could face Zverev in the semis, where he holds a 7-3 head-to-head record, including a quarterfinal Madrid win in 2019. However, I’d be more inclined to believe that Zverev has a shot at an upset here. Back in 2019, Zverev had yet to reach the level of play he’s at now. I wouldn’t be concerned with his Round of 16 straight-set loss to 19-year-old Holger Rune in Munich this week because an ATP 250 a week before a Masters 1000 event isn’t something that would intrigue a top-10 player.

This is an interesting tournament because you have players returning from injury that are favored (Nadal and Djokovic), players that are dominating the field (Alcaraz), and players, who if the draw breaks their way, could repeat a deep run (Tsitsipas and Zverev). I’m passing on Nadal. He’s coming back from a fracture and admitted to having little to no prep time for an event that doesn’t suit his game all that well.

The best bet would be to look at match play, but if you wanted to fire on an outright, then Zverev +1200 could be it. He has a friendly draw to the quarters and holds a 15-2 record here with two titles on a court that suits his big-serve and heavy groundstroke game. He could very well make it to the final and that’s what you want when taking futures — to wager a player most likely to make the final. The surprise factor could be a potential quarterfinal match against Sinner. If the Italian doesn’t have blister problems, he has a shot with his last two losses against Zverev being third-set tiebreaks. You could look to back Sinner as an underdog if that match does come to fruition.

As to who will be in the Final from the top half, I’m leaning to Alcaraz but he would have to get through Djokovic and I’m not ready to call that a win just yet. We’ve seen Alcaraz win three titles this season, two on clay, including ATP 500 Barcelona. We’ve only seen Alcaraz play one elite player, however, and that’s Nadal, whom he nearly picked off, losing 6-4, 4-6, 6-3 in the Indian Wells semifinals. Djokovic will find his rhythm again, and if he has found his way to the semifinal of this event, you have to believe that it’s his comeback time.