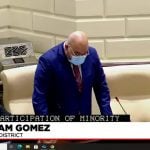 SPRINGFIELD, Mass. (WGGB/WSHM) -The State Senate passed a bill to legalize sports in the Bay State Thursday. A similar bill has already passed in the House nine months ago, but the House’s bill allows for betting on college sports, while the Senate does not. But Western Mass News learned there are a few more steps before Governor Charlie Baker could sign it into law.

We checked in with MGM Springfield and they assured Western Mass News they are prepared for sports betting to begin as soon as it becomes legal.

“There is a lot of back of forth right now. And the goal right now is to get some type of consensus,” said State Senator John Velis.

State Senator John Velis gave Western Mass News an idea of what the State Senate floor was like to pass their version of the sports betting bill. As he said, many Senators are weighing in on what they want in the bill.

“I think the devil is really in the details in terms of what that bill looks like with things like how many licenses. Where’s the revenue going to go? Is collegiate betting going to be a part of the process? So the bill will pass some time today,” said Velis.

On the House side, State Representative Orlando Ramos wanted to make sure small businesses outside of MGM Springfield could profit off of sports betting. Velis is on board with that.

“We all believe strongly that in some shape, form, or fashion small businesses should have a shot at this,” said Velis.

On Thursday afternoon, state Senator Adam Gomez stood up on the Senate floor to make that happen, requiring the Gaming Commission to study the participation in licensing and employment when it comes to minority, women, and veteran-owned businesses.

The bill will now go to the Conference Committee to come up with a compromise bill with the House. Senator Velis said he hopes to get a final bill to Governor Charlie Baker by the end of July.