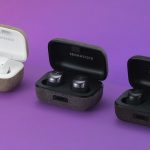 After almost spilling the news ahead of launch, Sennheiser has officially announced its new Momentum 3 True Wireless earbuds – a sequel to the lauded Momentum True Wireless 2 – that will be available starting on May 10.

The third outing for Sennheiser’s flagship earbuds offer adaptive active noise-cancellation and a new look that’s more reminiscent of the Sennheiser CX Plus. On the sound quality side, the Momentum 3 will support the usual AAC and SBC codecs, as well as aptX Adaptive that could help it compete with the LDAC codec found in the Sony WF-1000XM4.

Finally, if you plan on using them to take work calls, the Momentum 3 will sport three microphones per bud that Sennheiser says has led to noticeable improvements and “crystal clear quality”. We’ll need to test that for ourselves, but on paper that could help elevate them well above previous models and close to the top of our best true wireless earbuds list.

Having choices when it comes to your audio tech is important, so it’s nice to see that Sennheiser is pressing on with Momentum earbuds – even in the face of the Sony WF-1000X series that has dominated the landscape for the last few years.

What Sennheiser is offering with the Momentum 3 is a real competitor to the WF-1000XM4 at an even cheaper price. Sony will likely price drop the 1000XM4 to match with another price drop likely to arrive for Black Friday and Cyber Monday, but for a few months, Sennheiser has a real window of opportunity to break into Sony’s lead.

If there’s anything disappointing about the new earbuds it’s that Sennheiser hasn’t done anything to improve the battery life – it’s still stuck at 7 hours per charge with another 21 hours in the case. Sennheiser did add wireless charging, however, which is a nice touch.

These earbuds won’t support spatial audio formats like the Apple AirPods Pro or Sony WF-1000XM4 but, if previous models are anything to go by, their stereo sound should be as good or better than anything you’ve heard out of Sony or Apple’s earbuds.