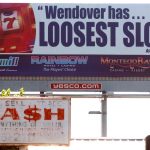 Utah just finished 50th in another ranking of the states, but, unlike those surveys about education funding, this is one that should make everyone in the Beehive State proud.

According to the personal finance website WalletHub.com, Utah is the nation’s least gambling addicted state.

Break out the root beer and pass around some green Jell-O. This is truly worth celebrating. However, in a nation where legalized gambling is beginning to wash across the landscape like acid rain, being the least infected doesn’t equate with being completely healthy. Gambling’s recent partnership with sports has led to near constant advertisements on TV during games, and internet gambling, although illegal in Utah, is within reach, especially when it comes to offshore casino sites. WalletHub ranked Utah 34th in gambling-related arrests per capita.

Whenever I write about this, critics repeat two common, but fallacious, counterarguments. One is that legalized gambling is no different than investing in the stock market. You win some, lose some, and it’s based on chance.

True, risk is involved with any investment. And, as with gambling, you should never invest more than you can afford to lose. But the key difference lies in what you get for your money. As the website investopedia.com puts it:

“When you gamble, you own nothing, but when you invest in a stock, you own a share of the underlying company; in fact, some companies actually reimburse you for your ownership, in the form of stock dividends.”

Not to mention how the market tends to perform well over time, while gambling sites tend to embrace marketing plans aimed at keeping customers chasing bad bets.

The second argument is that humans should be free to gamble with their money if they choose. The term “free agency” gets bandied about on comment boards. This is the flimsiest of all arguments. Law books are filled with statutes that limit human interactions when it comes to behaviors that hurt others.

No one could seriously argue that gambling doesn’t hurt more than just the unlucky person making a bet. The WalletHub survey’s intent was to measure the extent of gambling addiction in each state. It’s no coincidence that Nevada finished first and Utah last. Utah and Hawaii (ranked 46th), are the only two states that allow no forms of gambling. The more a society sanctions a behavior and allows it to be normalized and advertised, the more that behavior will spread.

Experts disagree on how many gamblers end up addicted, but studies have put the percentage between 2.3% and 12.9%, according to the National Library of Medicine. The WalletHub site said, “(Addicted) U.S. consumers experience over $100 billion per year in total gambling losses. Individually, a male gambling addict accumulates an average debt of between $55,000 and $90,000 whereas a female averages $15,000.” Jobs are lost, relationships are ended, crimes are committed and suicides have resulted from such addictions.

All of which can be hard to get upset about when you’re watching a game that is sponsored by a casino or a betting service, or when the play-by-play announcer weaves that sponsor into his coverage of the game.

That’s very much the way the tobacco industry penetrated sports and other entertainment in the 1950s and ’60s. On some broadcasts, home runs by the home team resulted in cartons of cigarettes being donated to a local veterans’ hospital, something that sounds ridiculously reckless and even cruel today.

Mark A. Gottlieb, the executive director of the Public Health Advocacy Institute at Northeastern University School of Law, drew this connection during a presentation sponsored by the advocacy group “Stop Predatory Gambling.”

“I see many similarities between the gambling industry and big tobacco,” he said. “Cigarettes are sold in packs that fit in our hand easily. … And now, in more than half the states, I think, gamblers can just similarly reach into their pockets for their phones to satisfy their need for action.”

It took years for society to understand the social costs of smoking, he said. Until we begin looking at gambling through a public health lens, we won’t see the need to curtail it, either.

Or maybe a huge scandal will change our focus. Last fall, New York Magazine contributing editor Will Leitch wrote in The Atlantic that sports gambling is a disaster waiting to happen.

“This tsunami of advertising — and the oceans of cash it generates — puts the integrity of the games we love at risk,” he wrote. “For all we know, the next big gambling scandal might already be happening.”

But chances are it’s not happening in Utah, and that’s something for which the state should be thankful.