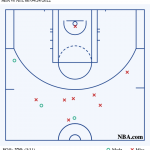 For the second time in the past four games, Kevin Knox has outscored Trae Young. Knox has played a total of nine garbage-time minutes in this Hawks-Heat series. It’s not breaking news here, but, um, that’s not the recipe for the Hawks pulling out the No. 8 vs. No. 1 upset in the first round of the playoffs.

But that realization for Atlanta is indicative of the bigger problem for the Hawks: They have no answer for how Miami’s defense has guarded Young this series. The Heat have held Young to 20-of-57 shooting from the floor, 7-of-33 from 3, 24 assists to 24 turnovers, just 66 points on 91 possessions — ranking him in the 10th percentile in the postseason, per Synergy Sports.

Miami has made life as difficult as possible for Young. Outside of his late-game performance in Game 3, Young hasn’t been good against the Heat. And when you watch each game, it’s understandable why he hasn’t been his usual dominant self.

“I haven’t been guarded like this — I’ve been guarded like this every now and then, but (not) consistently since high school,” Young said after Atlanta’s 110-86 loss in Game 4. “Obviously, it’s way better competition. It’s hard for me to score a lot more through the double-teams and face guards at this level. It’s a challenge for me. I’ve got to learn how to fight through it and make it easier for myself and my teammates. I’ll figure it out. That’s my plan.”

Let’s be real here: We’re four games into this series. The Heat’s plan every game has been to take out Young and make him more of a facilitator than a scorer. If the Hawks haven’t been able to draw up a response to attacking the Heat’s defense, it’s not happening and it’ll be offseason homework for himself and the organization.

That’s not a slight to Young. He’s in a precarious position right now. As we mentioned after Game 1 when it became apparent that Miami was just going to switch every pick-and-roll Atlanta was going to run, the Hawks were going to have to implement more off-ball movement for him to operate. They’ve done that, but to varying degrees of success. The fact is off-ball movement isn’t a frequent part of Young’s game, and he hasn’t had to rely on that much to get the looks he wants until this series. You’d hope that this series is a wake-up call for the Hawks and Young to address this long term.

For the Hawks, with this roster, taking Young out of his groove is a death sentence. They just don’t have the go-to secondary option who can consistently break down defenses off the dribble and make them pay when Young doesn’t have the ball. Bogdan Bogdanovic is the Hawks’ best option to do this, and though he’s capable, he’s better suited to be a catch-and-shoot sniper. De’Andre Hunter looked like he might turn into that guy before he tore his meniscus last season, but he’s got turnover issues. Kevin Huerter is a catch-and-shoot threat. John Collins still has a ways to go in terms of breaking down defenders one-on-one. They have one player who can consistently break down people off the dribble: Young. Look around in the other playoff matchups; the true contenders have multiple players who do this at a high level.

With Miami continuing to load up in locking down Young, it left him having to hoist up contested off-the-dribble shots Sunday night. Through four games, Young is shooting just 4-of-25 in off-the-dribble jumpers and 4-of-7 on catch-and-shoot opportunities. This was a good example of Young creating space for himself off a screen:

Because the Hawks don’t have someone who can take the pressure off of him, he’s going to have to do more of this for them to erase Miami’s 3-1 lead.

Young’s shot chart from Sunday night shows exactly how they’re loading up on him — and what shots they are comfortable with him taking. He took one shot inside the arc, a layup he missed in transition when the Heat’s defense wasn’t set. Everything else wasn’t easy, so much so that it made you wonder if Young’s foot was bothering him after Gabe Vincent stepped on it in the first quarter. But Young and Nate McMillan said the foot was fine.

Miami held Atlanta to a season-low 86 points in Sunday’s game. The Hawks were able to generate only 13 shots at the rim. Certainly, part of the reason for that was Young not attacking the paint as he normally does. He was settling for shots like these instead:

“If you’re watching the game, you see they have five people in the paint when I have the ball,” Young said. They’re doing a great job of showing help and not letting me get into the paint. When I’m driving, if I try to drive by somebody, they’re sending a double and forcing me to kick it to my teammates. I took 11 shots and probably took a couple of forced ones at the end. I really didn’t get too many clean ones. You have to give them credit. We have to do a better job of getting more open looks and getting them off me early so I can create not only for myself but my teammates.”

Perhaps getting more open looks would be easier if Young played with better ballhandlers around him. The success he had in Game 3 occurred when he played with Bogdanovic and Delon Wright, which is what we wrote about being something the Hawks should’ve considered. Bogdanovic played just 21 minutes in Game 4, and McMillan refused to give a reason or say if Bogdanovic might’ve been injured at some point in the game. If he wasn’t injured, it’s simply malpractice for him to not be playing close to 40 minutes a game because he’s been arguably the team’s best player this series, even though he was off in Game 4.

Not having a better No. 2 option for Young simply means the Hawks have to get either superhuman performances from their star every game or role players have to play above their talent level. Neither path is ideal for advancing deep into the postseason. The Hawks were fortunate last season to play a Knicks team that just wasn’t as talented as them and a Sixers team that mentally collapsed.

The real question now: how can the Hawks acquire said No. 2 option? That’s going to be the most interesting question this offseason — and we’ll surely be discussing it more in-depth when the season ends. They might be in a tough position because their young players didn’t take that leap, and in some cases, they went backward. Clint Capela and Collins might be their best trade options at this point, and losing one or both would be difficult to swallow, considering their value to the team. A trade for a No. 2 option isn’t as simple as including Hunter, Danilo Gallinari and some picks, then calling it a day. You’ve got to give up quality to get quality.

Secondly, it’s still unclear who could become available this offseason. Utah flaming out could mean Donovan Mitchell will be available. Young and Mitchell are close friends, but the defensive pairing would be a strong negative. On the other hand, teams sometimes can’t be picky when it comes to adding borderline-top-15 players to their roster. Maybe Oklahoma City is open to moving Shai Gilgeous-Alexander for more picks. Could Toronto decide Pascal Siakam isn’t the right No. 1 option for how it wants to play? What about the Lakers moving Anthony Davis because it appears to be the only way for them to meaningfully improve the roster around LeBron James?

This series has made it clear, though no matter who becomes available: Young needs an elite sidekick, and the Hawks have to be aggressive in getting him one. The Heat have provided the blueprint to beat this roster as currently constructed. Barring a stunning turn of events, we might be witnessing the end of this iteration of the Hawks in the coming days.