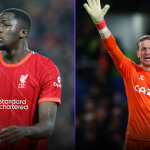 Liverpool take on Everton at Anfield this Sunday in the Merseyside Derby, in what is shaping up to be a crucial encounter at both ends of the table.

Jurgen Klopp’s Reds will be desperate to keep up their title charge and build on their 4-0 victory over their other arch-rivals Manchester United during the week.

On the other hand, the Toffees come into this one in relatively decent form after picking up four points from their last two games. Frank Lampard will look to continue to put out the relegation fire, as his side seek an unlikely win at Anfield to boost their survival hopes.

MORE: Have Everton been relegated in club history? Last time Toffees dropped down to second division and odds it happens again

How to watch Liverpool vs. Everton

In the US, televised Premier League games are available on fuboTV, which also offers a free trial to new subscribers.

In Canada, every Premier League game streams live on DAZN.

Liverpool will hope to welcome back forward Roberto Firmino for the Merseyside derby, after the striker missed the victory over Manchester United due to a foot injury sustained in the FA Cup semi-final.

Apart from the Brazilian, the Reds have no fresh injury worries ahead of the visit of Everton.

On the other hand, Everton will have Yerry Mina and Donny van de Beek available for the short trip to Anfield after both were featured in the matchday squad against Leicester City.

Nathan Patterson, Tom Davies, Cenk Tosun, and Andros Townsend are all ruled out owing to long-term injuries. Dele Alli may be included in midfield after an impressive showing during the week.

Liverpool go into this one as favourites, with much expectation placed on their ruthless attacking quality once again. Mohamed Salah returned to goalscoring form with a double against Manchester United on Tuesday and will hope to add to his 22 Premier League goals in 2021/22.

Everton may choose to sit deep and compact in the hope of breaking down opposition attacks. Following an improved couple of defensive displays in the past two games, Frank Lampard may attempt to orchestrate a counter-attacking threat to gain the result they need.