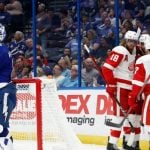 This content was produced by The Hockey News’ sponsor, BetMGM.

Four days after a shootout loss to the Washington Capitals on March 31, 2012, the Montreal Canadiens returned home for their 80th game of a season that was guaranteed to end without a playoff appearance for the first time since 2007.

In NHL betting, the Canadiens (29-35-15) were home favorites (-1.5, +270) against the Tampa Bay Lightning (37-35-7), who were also eliminated from playoff contention. And with two third-period goals to break open a 1-goal game, Max Pacioretty led the Canadiens to a 5-2 win and cover of the puck line.

Three days later, the Canadiens covered again as a home favorite against a bad team, the Toronto Maple Leafs, to cap another profitable late-season run for bad home favorites against bad road teams.

Over the last 15 years, sub-.500 teams – overtime and shootout losses counted as normal losses – are just 33-51 against the spread when playing sub-.500 teams in their 80th game or later. That record, however, because of plus puck line odds, have produced an ROI of +14.3%.

When does the ROI tide turn for late-season games between bad teams? It begins turning about five games earlier.

Some upcoming games between sub-.500 teams in their 80th game or later:

You can view updated NHL odds and more online sports betting opportunities at the BetMGM sportsbook.