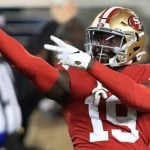 The odds are in regarding the next destination of 49ers receiver Deebo Samuel.

Via PointsBet, the Jets are the 3-1 favorite to land Samuel. It makes sense, given that the Jets were ready to trade for former Chiefs receiver Tyreek Hill.

Next on the list, at +400 (4-1) each, are the Packers, Saints, and Eagles. The Packers make no sense; they just traded Davante Adams after dragging their feet for months about paying him. Also, would the 49ers traded Samuel to the Packers? Probably not.

I’m very intrigued by the Patriots at +800. Samuel has the kind of versatility that coach Bill Belichick surely covets. Also, that hard-nosed playing style surely appeals to any old-school coach.