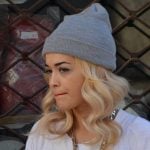 Rita Ora is good at making changes. The biggest one recently is moving to BMG for the release of her third album, a move that will secure her ownership of her masters — a position in the music business only certain artists can achieve. (See Taylor Swift’s fight for her masters as an example of the challenges an artist faces.)

But Ora marches to her own drummer, and now with BMG she’ll be the owner of those beats, too. But that’s not the only thing that keeps the native Londoner marching. Sometimes it’s just the sun that makes her feet move, and the obligation — which she apparently feels quite keenly — to share with her fans what it feels like to be Rita Ora wearing a bikini.

Because clearly to be Rita Ora wearing a bikini is to be something very special indeed. And the star knows it and generously doesn’t want to keep it to herself.

Besides, it’s not her top skill, the fashion, the style — it’s a breezy afterthought, after music, which is evidently why she seems so free and casual when she models the goods. Here she quotes the Beatles, saying “here comes the sun.” You know what they say after that, of course. “It’s alright.”

Ora is featured in the April issue of Australia’s Bazaar, where they do a terrific job of describing her range and accomplishments for the uninitiated, writing that her “whirlwind career has also included hit collaborations with Iggy Azalea, Drake, Ed Sheeran, Charles Hamilton and Liam Payne, and yet more acting roles, including as Mia Grey in the Fifty Shades franchise. She has also performed for former US president Barack Obama, at Mother Teresa’s canonization at the Vatican, at the Oscars…”

Got it. And she’s, as JLo just said, “just getting started.” It’s not even summer, which in the post below Ora confesses she can’t wait for. Looks like it’s here.