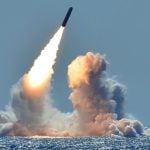 What are those biggest threats?

Our primary potential adversaries are China and Russia, which have clearly already demonstrated multiple ways that they would hold our space capabilities at risk. We’ve seen this in 2007, when China tested an anti-satellite missile that blew up one of their own satellites. By the way, today we’re still tracking thousands of pieces of debris from that test. That represents a threat to safety and navigation in space. Not a good event.

And then, most recently, Russia did the same thing on the 15th of November last year, blew up one of their satellites. And now we have hundreds more pieces of debris that we’re tracking because of that. In addition, they continue to develop other capabilities: satellite and navigation signal jamming capabilities; directed energy capabilities from the ground that could be used to dazzle, disrupt, or even damage satellites in low earth orbit, and so on.

So why are China and Russia doing this? Because they see what space means to modern warfare, and how dependent our terrestrial forces are on space capabilities. And they want to hold them at risk, because they’re actually afraid of the capabilities that our space assets bring to bear.

What’s the origin of this new paper you wrote? It has a grand scope, with references to history, philosophy, and literature—it definitely doesn’t read like a dry military report.

Oh good, success! At least in your view.

With the new United States Space Command in 2019, the president signed the mission set to us that included: Hey, you’re now responsible for that area that’s 100 kilometers above sea level, and upward and outward indefinitely. Which if you do the math, that’s a really, really large area. It’s like the entire universe minus the planet and a little atmosphere. That’s a lot. Now, of course, the relevant battle space isn’t that big. At least not yet.

Now that we have a physical area of responsibility, it means we have to understand what’s going on there. We have to “patrol” it. I put that in quotes, because we do that with robotic spacecraft.

I’ll also point out, as I do in that paper, that this is the first time in military history that we’ve had an area of responsibility that isn’t defined by lines on a geographic map. Technically, etymologically, our AOR is not geographic; it’s not lines written on the earth, it’s lines among the stars. So that’s why I use the word “astrographic.”