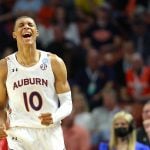 While half of the NBA prepares for the playoffs, the other half of the league has already turned its attention to the offseason. While most will be betting on the playoffs in the coming weeks, BetMGM has released betting odds for those who want to bet on NBA draft props as well.

Jabari Smith Jr. had a tremendous freshman season for Auburn, averaging 16.9 points and 7.4 rebounds per game. He was named the SEC Freshman of the Year and was also named to the All-SEC first team. Additionally, Smith was a second-team All-American. Smith was a huge part of the reason why Auburn went 28-6 and earned a No. 2 seed in the NCAA tournament.

Last week, Smith announced he was declaring for the NBA draft. Currently, Smith is the -105 favorite to be the first player taken.

Jabari Smith Jr. opens as the betting favorite to be the first pick of the NBA draft. (Kevin C. Cox/Getty Images)

Smith is one of the youngest players in the draft. He doesn’t turn 19 until next month. Over his freshman year, Smith proved to be a good defender and a top-end shooter. At 6-foot-10, 220 pounds, Smith projects as a potential elite wing in the NBA. Nobody is disputing that he’s one of the top prospects in the draft.

Holmgren, Banchero are in the mix

While Smith is the favorite to be drafted first overall, there are two other freshmen near the top of the draft board as well.

Chet Holmgren is 7-feet tall, which is obviously ideal from a size point of view. However, he’s not just a tall body. Holmgren is athletic and very skilled for a big man. He’s good defensively and a terrific shot blocker. He’s got good handles for his size and is a good shooter. The obvious concern with Holmgren is the fact he weighs under 200 pounds. He averaged over 14 points and nearly 10 rebounds for Gonzaga in his freshman season. Holmgren has the second-best odds to be the first overall pick at +155.

Another freshman is also in the mix: Paolo Banchero of Duke. This past season, Banchero averaged over 17 points and nearly eight rebounds per game. Banchero is 6-10, 250 pounds. He’s good in the post and a solid rebounder. He also has the athleticism to stretch the floor, though some might call his shooting inconsistent. Banchero is +300 to be the first overall pick.

Who will draft first overall?

The NBA draft lottery is scheduled for May 17.

Below are the current odds for each player to be the first pick of the NBA draft: