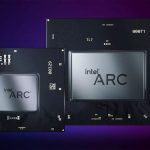 The Intel Arc Alchemist A350M mobile GPU doesn’t seem like it should offer serious gaming performance, but it was recently discovered that disabling a single feature could do exactly that.

The feature in question is Intel’s Dynamic Tuning Technology (DTT) driver. DTT works by “automatically and dynamically allocating power” between the CPU and GPU, which is supposed to help conserve battery life on laptops.

However, Korean YouTube channel BullsLab Benchmarks tested a Samsung Galaxy Book2 Pro laptop outfitted with an A350M GPU and disabled DTT. The testers found that while thermals and power consumption soared, so did gaming performance.

The A350M reaches a maximum power limit of 30W and a max frequency of 2.2GHz, but to conserve power, DTT appears to throttle the GPU. Disabling DTT removes that throttling, allowing for nearly 100% GPU utilization.

Tests also showed that it was around 30% faster than the Nvidia GeForce MX450 with a TDP of fewer than 20 watts. There’s also a massive boost to fps, with as much as a 80 FPS boost once DTT is turned off.

Currently, the Intel Arc Alchemist A350M isn’t available outside of Asia and Oceania, but hopefully that will soon change, because we’d love nothing more than to get our hands on one to test for ourselves.

Analysis: power consumption matters, but this is still huge for gamers

To be clear, power efficiency and power consumption are important features in a laptop, so it makes sense that Intel would try to balance power consumption to preserve battery life. But if you’re gaming, you’re way more likely to leave a laptop plugged in so you don’t get degraded gaming performance.

Intel might have simply throttled the GPU entirely, rather than just on battery power, because the Samsung Galaxy Book2 Pro laptop isn’t really designed for gaming. Still, gamers don’t just use gaming laptops, so having a workaround for Intel’s DTT tech is a huge boon to gamers who might be on the road for work but want to unwind in a hotel room with some game time.

Hopefully Intel makes an easier workaround than disabling the feature entirely, or at least gives a software option for unlocking the GPU’s performance so users can still use DTT when necessary.