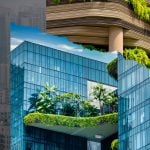 In 1973, Lee set up the Garden City Action Committee and sent out green missions across the globe. “Our botanists brought back 8,000 different varieties and got some 2,000 to grow in Singapore.” Lee personally picked Vernonia elliptica—an unusual choice, since it has no flowers and, if unkempt, looks like a weed. But the city’s gardeners used the species widely to decorate the walls of unsightly buildings, bridges, and overpasses.

Lee, nicknamed “Chief Gardener,” enticed the leaders of his neighboring countries to go green as well. “I encouraged them, reminding them that they had a greater variety of trees and a similar favourable climate.” This would lead to a green race, with neighboring countries trying to “out-green and out-bloom” one another. “Greening was positive competition that benefited everyone—it was good for morale, for tourism, and for investors,” Lee assumed.

Greening also became about survival. Singapore is a country the size of a city. With about 6 million people, it has the same population as Denmark, but in an area only half the size of London. As a result, the nation is dependent on neighboring countries, like Malaysia, for things as basic as water. However, Lee knew that his neighbor could cut off Singapore’s lifeline, fresh water, during times of conflict. Malaysia’s president once said, “We could always bring pressure to bear on them by threatening to turn off the water.”

To avoid relying on other countries, Singapore needed to be self-sufficient within its own compact footprint. Having to capture rainwater, it could not afford to leave its rivers polluted, as so many other countries have done. Singapore, in the name of self-sufficiency, had no choice but to go green.

In 1963, Lee consolidated different entities to set up a national water agency. For 10 years, the agency toiled to clean up the rivers, which until then were an open sewer. Public officials relocated factories and farms and built water reservoirs, planning to collect and reclaim stormwater in the city. “By 1980, we were able to provide some 63 million gallons of water per day,” Lee stated, “about half of our daily water consumption then.”

Today, Singapore features a myriad of water reservoirs, rooftops, parks, roadways, and sidewalks to all capture water. Two-thirds of its surface is a water catchment area. An elaborate system of channels, tunnels, and pumps then moves the water to treatment plants, all controlled by microprocessors.

Parallel to greening Singapore, Lee wanted to get people to own flats. Homeowners, he assumed, would have a bigger sense of belonging than tenants. The city’s Housing & Development Board (HDB) would build low-cost housing that citizens were allowed to rent and then purchase with their pension funds. Today, 88 percent of all Singaporeans are homeowners, among the world’s highest home-ownership rates. It’s worth noting that the system deliberately disadvantages same-sex couples and excludes several hundred thousand migrant workers, who are living in crowded dormitories. With limited land supply and rapid population growth, Singapore had no choice but to build up. It needed to house everyone in skyscrapers. This transition to high-rise living did not come easily, especially for pig farmers, Lee noted. “Some were seen coaxing their pigs up the stairs!”