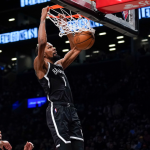 The Nets defeated the Cavaliers Tuesday night to claim the seventh seed in the East and continue their rise after being in tenth place not that long ago.

Kyrie Irving led the charge 34 points and 12 assists in the 115-108 victory, while Kevin Durant contributed 25 points and 11 assists.

Brooklyn will now face-off with No. 2 Boston. and the Celtics are favored to win the series with -152 odds at SI Sportsbook. Brooklyn owns +115 odds.

Despite being the 7-seed, Brooklyn is top-three in both championship and Eastern Conference futures at SI Sportsbook. Here are the latest odds:

I asked our SI Betting staff if the Nets should be trusted, and if they would bet on the Nets now that they are locked into a playoff spot.

Is it hype? Or are the Nets going to find a way to win it all?

I’m fading the Nets. Do I believe they have the ability to beat Boston, Milwaukee and Miami/Philly? Yes. But I’m not willing to bet on that actually happening. Kevin Durant is the best player alive, Kyrie can be magical but they just don’t have the defense needed. You saw that Tuesday night where they somehow let the Cavaliers cover. This seems like a situation where you’re betting on Durant basically carrying the Nets to the promised land, but I’m just not sure if that’s worth a bet when we’ve yet to see them consistently play at a high level.

I think you have to buy Brooklyn. I get it, they’ve had a turbulent season and Boston is good. However, the Nets are getting dangerously close to all the “if” situations finally working in their favor. BK has played well down the stretch of the season and have both Kevin Durant and Kyrie Irving healthy and available full-time as the playoffs begin. Not to mention, it seems very possible Ben Simmons will debut soon. This team hasn’t fallen too far down the odds for a reason as Vegas doesn’t want too much liability on KD and Kyrie. The Nets remain one of the teams that could win the title so it is hard to turn them down as a bet as long as they are offering positive returns.

The Nets made the first step toward a deep playoff run Tuesday. That is, they officially qualified for the postseason. In that sense, I’m more in on the Nets now than if they had lost to the Cavaliers and had their backs against the wall in a Friday one-game playoff with the Hornets or Hawks. I also think it’s good for Brooklyn to get Boston in the first round while Robert Williams III likely remains sidelined for the series. My answer is a bit of a copout, but I’m holding on the Nets and leaning toward fading them. That Kyrie Irving, Kevin Durant and Bruce Brown all played at the levels they did against a Jarrett Allen-less Cavs team and that game was still that close at the end is an indictment of Brooklyn’s status as a contender. I’m never going to count the Nets out, though.

I admit it, I was among those just a few months ago saying, “Just you wait, Brooklyn will turn it on and get hot in time to make a Finals run.” The play-in game against Cleveland wasn’t a huge obstacle, but I was disappointed that the Nets failed to avoid being in a play-in game in the first place. There’s a reason why a 7-seed hasn’t advanced past the second round of the playoffs in 10 years. And there’s also a reason why a lot of money came in early on the Celtics in this series. I’m no longer looking at the Nets as a sleeping giant; I’m looking at Boston as the better team and I don’t see Brooklyn advancing.

The Nets aren’t even the favorite to win their series against the Celtics, so how do they have the third-best odds to win the championship and the second-best odds to make it out of the East? Doesn’t make sense. Doesn’t add up. Don’t fall for the trap.

Could the Nets still win the Eastern Conference and take home the title? It’s certainly possible. But a lot of how Brooklyn performs in the playoffs will come down to two factors: Will its defense improve? And how will Ben Simmons, if he even does play, fit in with Kevin Durant and Kyrie Irving? If you believe that the league’s No. 20 defense will drastically improve in the playoffs—perhaps as a function of playing Durant more minutes—and if you think Simmons’s possible on-the-fly reintegration against a Celtics team that has the league’s best defensive unit won’t be an issue, then maybe the Nets’ +700 odds to win the title are more appealing. Plus, you’re getting more value today than you were when the Nets initially acquired Simmons. So, go right ahead! But those are two major questions, both of which might be offset having a player who is perhaps the sport’s best. Brooklyn’s odds have slipped all season for a reason, and it’s looking increasingly less likely that they advance out of the conference, let alone take home the title.