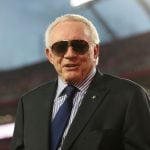 Jerry Jones has negotiated big-time deals with heavy hitters in all corners of the business world. Over the course of just a few minutes at a press conference on Wednesday, the Cowboys owner name-dropped Pepsi, Bank of America, Nike, Ford Motor Company, and AT&T, among other iconic brands.

That’s the level that Jones placed the Cowboys’ newest sponsor on right out of the gates.

“This is as significant a relationship as I’ve been a part of with the Dallas Cowboys,” Jones said at The Star in Frisco as he announced a first-of-its-kind exclusive partnership with cryptocurrency platform Blockchain.com.

The deal makes the Cowboys the first NFL franchise to add a digital currency platform as a sponsor; the league said it would begin allowing such sponsorships only at the recent owners’ meeting in Palm Beach. The announcement of the historic and massive mega-deal comes just two weeks after the conclusion of those meetings.

Blockchain.com will receive club space inside AT&T Stadium, rights to social and digital integrations, highly visible signage in the stadium’s seating areas, and extensive advertising. It’s the first national sports deal for Blockchain.com, according to CEO Peter Smith, the kind that will deliver a new kind of mainstream acceptance to cryptocurrency’s early adopters, while also lending immediate legitimacy to the futuristic concept in the eyes of a the Cowboys’ huge fanbase, many of whom are newcomers to crypto.

While fans will not yet be allowed to use cryptocurrency at AT&T Stadium, they will have the chance to earn exclusive experiences, like trips to away games and events hosted by Cowboys players. Educational outreach will also be an element of the partnership, with summits to be held for interested fans wishing to learn about digital assets and emerging technologies.

“Growing up in rural America where football is deeply rooted in the culture,” Smith said, “I’m incredibly honored to join forces with the world’s most valuable sports franchise and the Jones family, who have dedicated their lives to building a first-class franchise on and off the field for 33 years.”

For the Cowboys, the move represents the kind of groundbreaking deal that Jones lives to make in the hopes that others will follow. Cryptocurrency is the future, Jones believes, and the Cowboys will help bring it to the masses.

“We’re making an association in what I certainly would tell you I believe is a huge, huge look-see into the future of how things are going to be in this country,” Jones said, “especially in transactions, currency, and that particular area.

Blockchain.com reports it has more than 80 million customers in over 200 countries and has had more than $1.2 trillion in transactions on its platform. Its most recent valuation was $14 billion.