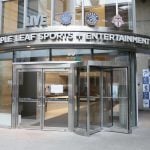 The deal, announced on Monday, is the latest in a string of new partnerships between professional sports teams, leagues, and major media organizations, and the collection of private sportsbooks that launched in Ontario on April 4. On Friday, the MLSE reached partnerships with FanDuel and PokerStars.

“You rarely get the opportunity to partner with an organization that spans across all four professional leagues… and offers year-round entertainment within the sports market in Canada,” PointsBet Canada CEO Scott Vanderwel stated in a news release on Monday.

Vanderwel is an Oakville, Ont.-native whose tenure at telecom and media giant Rogers Communications (RCI-B.TO)(RCI) involved the company’s $5.2 billion deal in 2013 for the right to broadcast NHL games across Canada.

A PointsBet spokesperson declined to provide the duration of the deal with MLSE. The terms include a wide array of promotional and media opportunities, including in-stadium advertising on rink boards for all 41 home Leafs and Marlies home games, and digital signage along Toronto’s Gardiner Expressway, a major highway metres from Scotiabank Arena and Rogers Centre.

Ontario is the only province where privately-owned sportsbooks are legally allowed to compete with government-run wagering platforms. Deloitte Canada has predicted the model will spur business opportunities spanning the entertainment, IT, telecom, media and secure payment sectors.

According to Vixio GamblingCompliance, the province’s online gambling market is expected to generate $989 million in gross revenue in its first year, hitting $1.86 billion by 2026.

The deal between MLSE and PointsBet comes on the heels of several high-profile partnerships involving sportsbooks. Last Thursday, the Toronto Blue Jays, owned by Rogers, struck a partnership with Score Media and Gaming. That same day, the National Hockey League announced partnerships with FanDuel and BetMGM. (Yahoo Sports U.S. has a partnership with BetMGM in U.S. jurisdictions where single-sports betting is legal). Last Monday, telecom and media giant BCE (BCE.TO)(BCE) inked a deal to enhance its TSN sports network with betting-focused content through a multi-year agreement with FanDuel.

Speaking to Yahoo Finance Canada in January, marketing expert Tony Chapman said a sponsorship deal with MLSE would be highly prized by sportsbooks looking to grow their audience in the highly-competitive opening phase of Ontario’s new legal market.

PointsBet shares trade on the Australian Stock Exchange under the symbol (PBH.AX).

Download the Yahoo Finance app, available for Apple and Android.