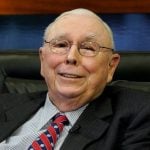 Munger, who turned 98 on New Year’s Day, is best known as Warren Buffett’s right-hand man and the vice-chairman of Berkshire Hathaway. However, he’s also been the chairman of Daily Journal since 1977, and manages the newspaper publisher and software supplier’s investment portfolio.

The veteran stock picker initially bought 165,000 American Depositary Shares (ADS) of Alibaba in the first quarter of 2021. He boosted that position by 83% in the third quarter of 2021, then another 99% to just over 600,000 shares last quarter, regulatory disclosures show. In other words, Munger grew the holding by about 260% in six months, when Alibaba’s stock price almost halved.

Alibaba and other Chinese technology stocks have been hit hard by tougher rules and increased regulatory scrutiny in recent months. For example, China’s market regulator fined Alibaba this week for failing to report deals, after slapping it with a record $2.8 billion penalty in April last year for abusing its market dominance.

Daily Journal’s Alibaba stake was worth about $72 million on December 31, representing about 28% of its US stock portfolio. Munger likely spent between $42 million and $53 million doubling the position last quarter, based on the stock’s trading range in the period. He made no other changes to the portfolio, which was worth $259 million and contained only five stocks at the end of December.

Despite its tough run with Alibaba, Daily Journal notched a 94% gain on its investments in the year to September 30, lifting its total unrealized gains by 77% to $244 million.

Read more: The Smead Value Fund beat 99% of its peers in 2021. Its managers share where they’re putting their money in 2022 — including 3 stocks they’re betting big on.