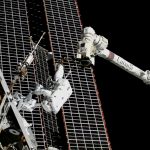 Though it was never in doubt that the US would continue its near-term commitment to the ISS, NASA’s announcement comes amid heightened tensions with Russia, one of several nations sharing access to the Space Station. 2021 also saw Russia deepen its cooperation in space with China, another US adversary, as The New York Times noted in June.
Fall 2021 saw multiple emergencies aboard the ISS, both of which the US blamed on Russia. In October, surprise test fire from a docked Russian spacecraft caused the ISS to tilt out of its normal position, leading personnel on board to briefly evacuate. (A fun footnote: The spacecraft that caused the incident had been in space so that a Russian crew could film the first feature film aboard the Space Station.) Then, in November, satellite debris forced ISS astronauts to seek shelter on the day as a Russian missile attack. The US condemned Russia for the attack. Russia did not acknowledge any wrongdoing.

Later that month, in an unrelated episode, Russia’s space agency, Roscosmos, left the door open for possible criminal charges related to a 2018 incident involving a hole in one of its spacecraft, which Russian media insinuated could have been the result of US sabotage. “These attacks are false and lack any credibility,” Nelson told Ars Technica in November.

In its statement on Friday, NASA highlighted among its continuing projects sending humans to Mars, as well as Project Artemis, an effort to send the first woman and the first person of color to the Moon. Indeed, NASA underwent a reorganization in September that seemed to specifically reflect its priorities around the Moon and Mars.