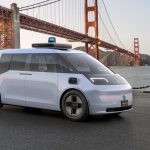 In the future, Waymo’s robotaxi fleet in the US will feature electric vehicles build specifically for the service by Chinese automaker Geely. The Alphabet company has teamed up with Geely to create a version of its recently launched all-electric Zeekr vehicle that’s custom-built for autonomous ride-hailing. Waymo has detailed and shown renders of the modified EV, which was designed in Sweden, in a blog post.

It has no steering wheel or pedals, as you’d probably expect by now from a purely autonomous vehicle — where the traditional cockpit would be is a tablet that most likely serves as the navigation and infotainment system. Waymo said they modified the vehicle and gave it a flat floor for more accessible entry, generous head and legroom, reclining seats and chargers all around. The company will then incorporate its Driver technology, which includes its software and hardware components like cameras and sensors, into the vehicles.
Waymo’s current ride-hailing fleet consists mostly of Jaguar I-Paces and Chrysler Pacifica hybrids also modified with its technology. While it didn’t specifically mention its vehicles, a spokesperson told TechCrunch that its team-up with Geely will not affect its current partnerships. The company also didn’t mention when passengers will be able to ride the Geely vehicles, only that they will be added to its fleet in the US over the coming years.