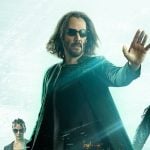 It’s Christmas Eve, folks! So, while we hope you’re preparing for a day of merriment and gift-giving, now is a good time to tell you about all the great movies and TV shows worth watching tomorrow evening as you lounge around on the sofa, eggnog in-hand.

And boy, what a selection it is this year. From The Matrix Resurrections to Don’t Look Up, the streaming giants have clearly saved some of their biggest releases for the festive season, so those with several subscriptions on-the-go will find themselves spoilt for choice.

Below, we’ve rounded up the seven biggest arrivals available to watch on Netflix, HBO Max and Prime Video over the next few days. Happy Holidays, everyone!

After several hype-inducing trailers, The Matrix Resurrections is finally here. Keanu Reeves and Carrie-Anne Moss make their return to the iconic sci-fi franchise with this fourth instalment – the first since 2003’s The Matrix Revolutions – which sees Neo reopen his mind to the dangerous and complex world of the Matrix.

For our full thoughts on The Matrix Resurrections, check out our review. But we can say – without spoilers – that it’s a “riveting and nostalgia-infused re-tread” of a franchise we know and love, even if it does have some notable missteps.

Now available to stream on HBO Max for 30 days

Matching The Matrix for star power this week is Adam McKay’s disaster satire, Don’t Look Up, which is now available to stream on Netflix after a brief theatrical run.

It tells the story of two astronomers, Dr Randall Mindy (Leonardo DiCaprio) and Kate Dibiasky (Jennifer Lawrence), who discover a planet-killing comet headed towards Earth. The pair set out to convince the world of the existential threat it faces, but have a predictably hard time selling the science to a society more interested in memes than meteorites.

We spoke to McKay’s science advisor on the movie, NASA astronomer Dr Amy Mainzer, who explained the troubling reality behind its fictional threat. For fans of The Big Short and Succession, Don’t Look Up is definitely one to watch.

After struggling to make waves in theaters against the might of Spider-Man: No Way Home, Disney’s latest animated adventure, Encanto, arrives on Disney Plus this Christmas Eve.

It tells the tale of the Madrigals, an extraordinary family who live in a wondrous, charmed place called the Casita, a magic-imbued and sentient house. Each child in the family has been blessed with a magical gift, except for Mirabel (Stephanie Beatriz), who is called into action when the family home is threatened. Expect color and culture in the vein of Coco from this one.

Disney Plus subscribers won’t need to fork out extra to watch it, either. Unlike other recent releases, including Black Widow and Jungle Cruise, Encanto isn’t locked behind the streamer’s Premier Access paywall, so it’s free to all current subscribers. This is one for families to check out after the kids are done playing with their new presents, we suspect.

Now available to stream on Disney Plus

Being the Ricardos (Prime Video)

Nicole Kidman plays Lucille Ball alongside Javier Bardem as Desi Arnaz, while J.K. Simmons and Nina Arianda star as Fred and Ethel, respectively. If Sorkin’s previous work is anything to go by (think The Social Network), expect a war of words and simmering dramatic tension.

Early reviews have been generally positive for this one, with praise directed towards the nuanced performances of Kidman and Bardem, in particular.

Hoping to ride on the coattails of Squid Game’s meteoric success is The Silent Sea, which arrives on Netflix this week as the streamer’s latest Korean TV drama.

In this eight-episode sci-fi series, space explorers attempt to retrieve samples from an abandoned research facility steeped in classified secrets during a perilous 24-hour mission on the moon. As you’d expect, events don’t exactly go to plan.

Squid Game alumni Gong Yoo and Heo Sung-tae star alongside Sense 8’s Bae Doona in this one, which looks to combine the eerie atmosphere of Alien with the big-budget VFX of Interstellar.

Having found herself in heaps of love-related trouble at the end of season 1, the titular fashionista navigates more romantic entanglements and questionable friendships in the show’s latest 10-episode outing.

Early criticism has suggested that Emily in Paris season 2 tries to move away from the cultural clichés that saw it come under fire on first release last year, but existing fans will likely find more of the same addictive drama to enjoy this time around.

It explores the decades-long relationship and rivalry between Marvel and DC Comics, with insight from artists, actors and those at the heart of an industry in the rudest health.

This one is based on Tucker Reed’s excellent book, Slugfest: Inside the Epic 50 Year Battle Between DC and Marvel, and is bound to unmask plenty of superhero-related surprises.

Now available to stream on The Roku Channel