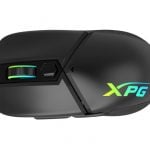 Have you ever looked at your mouse and thought “it’s fine, but kind of a big fat waste of space?” Gaming accessory company XPG apparently did, because it’s just unveiled a concept mouse for CES 2022 with a built-in high-speed SSD drive stuffed inside, Digital Trends has reported.

The XPG Vault Gaming Mouse is a wired USB-C mouse that the company calls a “gaming library in the palm of your hand.” The prototype model supports up to 1TB of memory that can run at a surprisingly fast 985 MB/s. The storage can be controlled by XPG’s gaming software app. “Gaming Launcher software… promises to make your gaming libraries conveniently portable and [add] a higher level of game integration with XPG Prime Software Ecosystem,” the company said.
It looks like a pretty normal mouse, though it’d require a pretty stout USB-C cable to support those kind of speeds. It’s not the worst idea we’ve heard, because it gives you some high-speed storage while freeing up a USB slot that’d normally be taken by a wired mouse. XPG didn’t mention the mouse’s DPI or any other gaming specs.

Mice with built-in USB storage aren’t unheard of, though we haven’t seen anything notable recently. Wild gadgets often pop up at CES, however, helping companies grab some attention and publicity. Aside from the prototype mouse, XPG also unveiled some products that could come to market next year including PCIe Gen5X SSDs, DDR5 DRAM and the XPG Wired/Wireless Alpha gaming mouse.