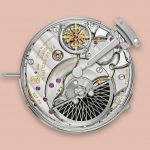 The technical challenges confronting most watch brands begin and end with the need for precise and reliable timekeeping. But in horology’s top tier, a more unexpected battleground has emerged in recent years: the quest for acoustic dominance.

Chiming watches, emitting delicate mechanical pings to give an aural reading of time, are seen as pinnacle creations in watchmaking. But in an era of ever smaller technology with progressively impressive audio capabilities, sound quality has become an increasingly critical factor. So it follows that in watches a rich bong versus a frail ding is a rather more conspicuous manifestation of excellence than precision of a few seconds per day.

Accordingly, the likes of Audemars Piguet, Chopard and Bulgari have been competing to improve sonority by any innovatory means. Patek Philippe, the brand with by far the largest array of chiming watches, has joined the audiophile party with the latest watch from its Advanced Research program, which focuses on developing novel technologies for watchmaking.

Reference 5750, a platinum-cased minute repeater, uses an all-new chime-amplification system called the Fortissimo module, which rethinks the way sound is spread within and out of the watch. The technical inspiration is from a concept as antiquated as the mechanical wristwatch itself: Thomas Edison’s phonograph, the first record player.

In a minute repeater, a lever pulled on the side of the watch case activates an interior mechanism of hammers and gongs, sounding out the time in a series of two-note chimes. The technology emerged in clockmaking in the 17th century and was subsequently miniaturized for pocket watches. Why was this so important? It meant time could be told in the dark.

The key component of the 5750 is a clear oscillating disc of sapphire crystal, just 0.2 millimeters thick. The large vibration surface amplifies sound waves transmitted via a steel lever attached to the disc’s center.
Courtesy of Patek Philippe

These were rare, high-prestige items, as they are today: According to Patek Philippe, which produced the first modern wristwatch minute repeater in 1989, a single watchmaker can spend as many as 300 hours assembling one.