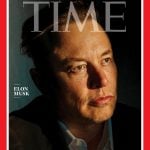 Time magazine has named Tesla and SpaceX CEO Elon Musk as its Person of the Year, for an incredible 12 months of achievements in which he jockeyed for the crown of world’s richest person and made his Twitter account a must-read while moving the needle on climate change, cryptocurrencies, space exploration, and universal broadband.

In April, NASA granted Musk’s rocket company SpaceX an exclusive contract to put United States astronauts on the moon for the first time since 1972 – moving Musk one step ahead of rival old-guard rocket firm Boeing and one step closer to his stated goal of helping to make humans a multi-planetary species.

In May, Musk hosted Saturday Night Live, using the television show as a platform to poke fun at himself and to raise awareness of Asperger syndrome, a mild form of autism, by announcing that he has it.

In October, Musk’s growing wealth received yet another turbo-charge after car-rental company Hertz said it planned to buy 100,000 Teslas for its customers. The news sent Tesla stock soaring and the electric vehicle company’s valuation past $1 trillion.

Though electric vehicles comprised just 0.43 percent of all vehicles in operation in the US in the first half of this year, Tesla commanded roughly two-thirds of that market, according to Experian Automotive.

All those milestones did not quell Musk’s quirky (and sometimes costly) behaviour. He regularly shares humorous memes with his 65 million followers on Twitter. Last month, Tesla shares took a knock after Musk asked in a Twitter poll whether he should sell his Tesla stock, which he has to the sum of nearly $11bn dollars, according to the US Securities and Exchange Commission.

He’s also used Twitter as a platform to help move cryptocurrencies more into the mainstream. In February, Musk announced that Tesla had bought $1.5bn in Bitcoin and signalled its intent to start accepting it as payment. He also extolled Dogecoin through a series of memes that helped transform the once-joke cryptocurrency into a sought-after digital asset.

But he also showed the limits of his crypto boosterism, tweeting in May that Tesla would suspend accepting payments in Bitcoin and citing concerns over the cryptocurrency’s carbon footprint.

Not just dollars and memes

“Had the 800,000 Teslas sold in the last year been gas-powered cars, they would have emitted more than 40 million metric tons of CO₂ over their lifetimes—equivalent to the annual emissions of Finland,” Time magazine wrote in its profile of Musk.

But curbing emissions is just a part of his grand vision for humanity. Musk also wants people to start colonising Mars.

“The goal overall has been to make life multi-planetary and enable humanity to become a spacefaring civilization,” Musk told Time.

When asked by Time about the timeline for sending people to Mars and refueling on the Red Planet to come back to Earth, Musk responded: “I’ll be surprised if we’re not landing on Mars within five years.”

Back here on Earth, Musk is working to close the digital divide with Starlink, a satellite broadband service with nearly 2,000 launched satellites to date. He hopes to launch as many as 42,000 more to provide internet service to underserved developing and rural communities around the globe.

Musk is also in talks with Brazil’s government on how Starlink’s satellites can help combat the Amazon’s deforestation and forest fires. And he’s taking steps to provide internet services to rural India.

Musk arrives ahead of the launch of the SpaceX Falcon 9 rocket with the Crew Dragon capsule, before the launch of their NASA commercial crew mission at Kennedy Space Center in Cape Canaveral, Florida, the United States [File: Joe Skipper/Reuters]

But things are not all starry-eyed for the billionaire. Some former employees have accused his companies of fostering an environment where sexual harassment, poor working conditions and racism are prevalent. Earlier this year, a federal jury ordered Tesla to fork over $137m to an African American former employee at the EV maker’s factory in Freemont, California, who said that Tesla turned a blind eye to racial abuse.

Tesla has been fined for regulatory violations. And the National Highway Traffic Safety Administration is looking into the safety of Tesla’s Autopilot software after a complaint implicated it in a crash.

Musk’s Midas touch and expanding net worth have also landed him in the inequality crosshairs and the debate over whether the government should force the rich to pay more taxes.

Born in Pretoria, South Africa, Musk moved to the US to attend Stanford University as a PhD candidate, but dropped out. He co-founded internet mapping service Zip2 and e-payment company PayPal, which were then sold to Compaq and eBay, respectively.