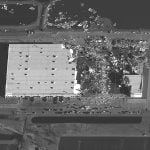 CHICAGO (AP) — Search efforts at an Amazon facility in Illinois where at least six people were killed in a tornado were expected to take several days, but authorities said they did not expect to find additional survivors.

The company has not said how many people were in the building not far from St. Louis when the tornado hit at 8:35 p.m. Friday — part of a swarm of twisters across the Midwest and the South that leveled entire communities. Authorities said they didn’t have a full count of employees because it was during a shift change and there were several part-time employees.

Both sides of the warehouse used to prepare orders for delivery collapsed inward and the roof caved, according to Edwardsville Fire Chief James Whiteford. Authorities received reports of workers being trapped and the fire unit arrived within six minutes, Whiteford said. Police helped pull people from the rubble. While 45 employees survived, six people were killed and a seventh person was airlifted to a hospital.

Whiteford said crews would search the rubble for several days.

Cope’s younger sister, Rachel Cope, said her brother had worked for Amazon for over a year and served in the Navy. He was also an avid motorcycle rider, lover of video games and his dog, Draco.

“He would go out of his way for anyone,” she told The Associated Press in a written message.

Nonn’s said Sunday there were no pending reports of missing people related to the building collapse.

“Search efforts continue to ensure that there are no additional victims,” he said in a statement.

The damage to the building was extensive; the structure’s steel support pillars were exposed after the walls and roof caved.

“These walls are made out of 11-inch thick concrete, and they’re about 40 feet tall, so a lot of weight from that came down,” Whiteford said at a Saturday news conference.

Employee Amanda Goss had just started her first week in a new job as an Amazon delivery driver when the tornado hit.

“As I look up, the corner of the building was shaking, and it comes down the garage area and then I felt the gates coming in behind me,” Goss told KTVI-TV. “All I do is sit there in my van hoping it don’t move.”

The Amazon facility, among three in Edwardsville, is a 1.1 million square foot (102,193 square meter) “delivery station” that employs about 190 workers across several shifts, according to Amazon. The facility, which opened in July 2020, prepares orders for “last-mile delivery” to customers. Edwardsville is about 25 miles (40 kilometers) northeast of St. Louis.

“Our thoughts and prayers are with the victims, their loved ones, and everyone impacted by the tornado,” Amazon spokesperson Kelly Nantel said in a statement. “We’re continuing to support our employees and partners in the area.”

Amazon said that when a site is made aware of a tornado warning, all employees are notified and directed to move to a shelter.

But company officials declined to answer specific questions about when employees were warned.

A union representing retail employees that has pushed to organize Amazon employees blasted the company for “dangerous labor practices” for having employees work during the severe weather.

“Time and time again Amazon puts its bottom line above the lives of its employees,” Stuart Appelbaum, President of the Retail, Wholesale and Department Store Union Requiring, said in a statement. “Requiring workers to work through such a major tornado warning event as this was inexcusable.”