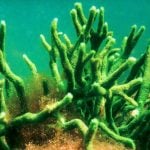 In fact, many multifunctional cells in sponges express modules of genes usually associated with specialized cells in more complex animals like vertebrates. For example, sponge neuroid cells not only express some of the presynaptic machinery of neurons, but also express immune genes. (It’s possible that if neuroid cells monitor the microbial content of the digestive chambers for sponges, these immune genes assist in that role.) Sponges also have cells called pinacocytes that contract in unison like muscle cells to squeeze the animal and expunge waste or unwanted debris; pinacocytes have some sensory machinery that responds to nitric oxide, a vasodilator.

“Our data are very consistent with this notion that a large number of important functional pieces of machinery existed early in animal evolution,” Musser said. “And a lot of early animal evolution was about starting to subdivide this out to different cells. But likely these very first cell types were very multifunctional, and they had to do multiple things.” The earliest animal cells, like their close relatives the protozoans, probably had to be cellular Swiss Army knives. As multicellular animals evolved, their cells may have taken on different roles, a division of labor that may have led to more specialized cell types. But different lineages of animals may have divvied things up differently and to different degrees.

If the mixing and matching of genetic modules was a crucial theme of early animal evolution, then comparing the arrangement and expression of those modules in different species could tell us about their history—and about possible limitations on how haphazardly they can be shuffled. One researcher looking for those answers is Arnau Sebé-Pedrós, who studies cell type evolution at the Center for Genomic Regulation in Barcelona and who published the first atlases of cell types in sponges, placozoans and comb jellies in 2018.

Sebé-Pedrós thinks that the spatial configuration of the genes along the chromosomes could be revelatory because genes located together can share regulatory machinery. “I’m absolutely shocked by the degree of conservation of the gene orders in animal genomes,” he said. He suspects that the need to co-regulate sets of functionally related genes keeps them in the same chromosomal neighborhood.

Scientists are still in the early days of learning how cell types evolve and relate to one another. But as important as it is to clarify the muddy origins of animal evolution, sponge cell atlases are also making a major contribution by revealing the possibilities in animal cell biology. “It is not just important for us to understand the very origin of animals,” Sebé-Pedrós said, “but also to understand things that may be radically different from anything else that we know about other animals.”

Original story reprinted with permission from Quanta Magazine, an editorially independent publication of the Simons Foundation whose mission is to enhance public understanding of science by covering research developments and trends in mathematics and the physical and life sciences.