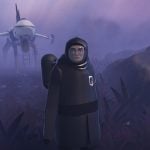 Ahead of you is a vast pink sky and a teeming alien planet. Your copilot, Isao, asks you to cut the aircraft’s engine. He wants to savor this moment: your first look at an entirely new world.

Jett: The Far Shore is training you with this short exchange. It asks you to take your time, not just so that you soak up its beautiful vistas but because part of your mission to this alien planet is to observe and gather data on the planet’s indigenous wildlife, just like an actual astrobiologist. The game’s ethos can’t quite be summed up as “leave no trace” (this is a story of space colonization, after all), but it asks you to tread lightly at almost every turn.

The idea for the game percolated for a long while. Jett’s designer Craig Adams and programmer Patrick McAllister trace its roots back to 2007, but an environmental ethos has been part of the duo’s lives for many more years. In the late ’90s, Adams enrolled in a university course on climate science before switching to art school (“flaking out,” as he describes it over a Zoom call). McAllister was a keen Boy Scout growing up. He describes one formative moment canoeing on the border of Minnesota and Ontario. On the US side was rubbish littering what should have been an idyll; on the Canadian side, a pristine wilderness.

In Jett: The Far Shore, there’s nothing but untouched nature—but only once you migrate to the extraterrestrial planet. The game’s introduction, viewed from protagonist Mei’s first-person perspective, gives you some indication of what is happening at home. Factories spew fumes into the atmosphere, citizens stand with gas masks covering their faces. The mood is oppressive in every sense. Is this some kind of extinction event?

p class=”paywall”>Once you get into the body of the game, the tone lightens. From screenshots, you might notice how tiny the aircraft you’re piloting is. The camera is pulled back so far as to make you a speck in the environment. You skim across it gracefully, changing direction with a well-timed handbrake turn, all while managing the heat of your thrusters. There are plants called ghokebloom that, if you hit your booster at just the right time, don’t just catapult you into the sky, but erupt into flowers that sparkle across the ground. Adams explains that this organism is inspired by the fungal networks that exist beneath forests, a discovery made by renowned scientist Suzanne Simard in the 1990s. She found that the fungi shift nutrients to areas that need it most so that symbiotic health is maintained with the trees above, a kind of sentient intelligence.

Jett: The Far Shore’s attitude toward the environment is different to most video games. In No Man’s Sky, for example, once you land on one of its procedurally generated planets, it’s never long before you start mining resources to level up your base or ship. Jett: The Far Shore doesn’t depict this kind of extractive gameplay, partly because humans in the game have already messed up their home planet and can’t afford to do so again, and partly because it’s simply not the kind of sci-fi story Adams wants to tell. “On some level, the wonders of the universe are just grist for the mill,” he says.

“If you end up with a design where you’re just committing yourself to perpetual conquest and conflict, just repeatedly killing things and collecting them, it’s going to distort a lot of things,” he continues. “It’s going to distort tone and meaning, and even on a pretty atomic level, it’s going to distort your characters. We had an interest in having characters that the player might enjoy the company of, and that they might want to root for. We wanted these characters to feel like they were living the events of the story alongside you.”